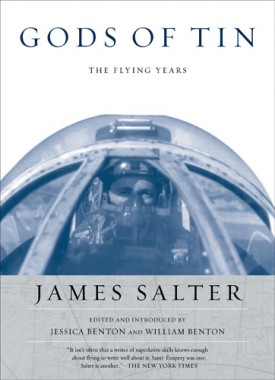 A singular life often circles around a singular moment, an occasion when one’s life in the world is defined forever and the emotional vocabulary set. For the extraordinary writer James Salter, this moment was contained in the fighter planes over Korea where, during his young manhood, he flew more than one hundred missions.

James Salter is considered one of America’s greatest prose stylists. The Arm of Flesh (later revised and retitled Cassada) and his first novel, The Hunters, are legendary in military circles for their descriptions of flying and aerial combat. A former Air Force pilot who flew F–86 fighters in Korea, Salter writes with matchless insight about the terror and exhilaration of the pilot’s life.

William Benton received his early training in music, and worked as a jazz musician before becoming a writer. He is the author of several books of poetry, including Marmalade, Normal Meanings, Eye La View, Birds, and The Bell Poems. His poetry has been published in The New Yorker, The Paris Review, Open City, and other magazines.

He has written a number of catalogue essays on artists, among them Joan Brown, Duncan Hannah, George Johanson, and James McGarrell. He is also the author of Madly, a novel. His most recent books are A Quatrain on Sleeping Beauty's Tomb, a translation of Boris Pasternak's poems, and Exchanging Hats, on the paintings of Elizabeth Bishop. He lives in New York City.