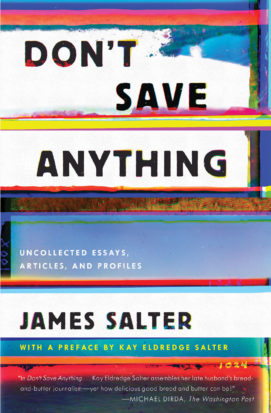 “In Don’t Save Anything . . . Kay Eldredge Salter assembles her late husband’s bread–and–butter journalism—yet how delicious good bread and butter can be! . . . As always, Salter emphasizes simple, vivifying details.” —Michael Dirda, The Washington Post

One of the greatest writers of American sentences in our literary history, James Salter’s acute and glimmering portrayals of characters are built with a restrained and poetic style. The author of several memorable works of fiction—including Dusk and Other Stories, which won the PEN/Faulkner Award—he is also celebrated for his memoir Burning the Days and many nonfiction essays.

In her preface, Kay Eldredge Salter writes, “Don’t Save Anything is a volume of the best of Jim’s nonfiction—articles published but never collected in one place until now. Though those many boxes were overflowing with papers, in the end it’s not really a matter of quantity. These pieces reveal some of the breadth and depth of Jim’s endless interest in the world and the people in it . . . One of the great pleasures in writing nonfiction is the writer’s feeling of exploration, of learning about things he doesn’t know, of finding out by reading and observing and asking questions, and then writing it down. That’s what you’ll find here.”

This collection gathers Salter’s thoughts on writing and profiles of important writers, observations of the changing American military life, evocations of Aspen winters, musings on mountain climbing and skiing, and tales of travels to Europe that first appeared in The New Yorker, Esquire, People, Condé Nast Traveler, the Aspen Times, among other publications.

Praise
Praise for Don't Save Anything

"In Don’t Save Anything . . . Kay Eldredge Salter assembles her late husband’s bread–and–butter journalism—yet how delicious good bread and butter can be! . . . As always, Salter emphasizes simple, vivifying details."" —Michael Dirda, The Washington Post

"Its every page offers pleasure, the profound, joyful pleasure of watching a masterful writer at work. 'The thing that is marvelous is literature, which is like the sea, and the exaltation of being near it,' Salter writes. For those who feel this exaltation, those who love the unique, inimitable sentences Salter contributed to that marvelous thing, Don’t Save Anything will seem a precious gift." —Chicago Tribune

"James Salter honed over the course of 60 years the lean, elegant prose style that graces each page in this new collection, Don’t Save Anything . . . There’s much to admire in the values Salter conveys with such lucidity in his work." —The Boston Globe

""The collection offers something for every taste, along with a fascinating mosaic–like view of Salter's unfailingly interesting life." —Harper's Bazaar, 1 of 8 New Books You Need to Read in November

"This posthumously issued gathering of some of Salter’s non–fiction is made up of interviews with writers, travel and sports journalism, memoir and other miscellanea, but it might have been put forward as evidence of his pursuit of the true life. Salter emerges as a man of hyper–competence, curiosity and charm; writing at one moment about skiing or rock climbing and the next about the doctors behind the first artificial heart. All of this is lit by his desire to live fully while maintaining his composure . . . Salter, in these pages, meets every challenge with courage and flair." —The Times Literary Supplement

"We should count our lucky stars that this much more of [Salter's] work is now so close at hand. It’s one more invitation to wade out into the sea where he plunged himself a full 60 years ago and to which he belongs now, a lifeguard on the horizon signaling that the water is just fine." —The Millions

"Don’t Save Anything shows [Salter's] affection for both the written word and the world at large." —Las Vegas Weekly

"Delightful . . . this book reminds us that Salter, who died in 2015, was among his generation's finest literary craftsmen." —Star Tribune (Minneapolis, MN)

"[Salter's] observations are acute and self–aware, while at the same time bringing beauty into everything he describes." —Dan's Papers "No writer in the last half–century wrote a tighter sentence than James Salter." —Head Butler

"Enlightening . . . These essays offer a fascinating window into the experiences of Salter’s generation, and the wars, presidents, and writers who helped to shape his worldview. Not only for Salter’s fans, Don’t Save Anything is for anyone interested in the varied topics he discusses and American literature." —Booklist

"The late Salter was commonly regarded as a writer’s writer, and this superb collection shows why . . . Crisp and razor sharp, Salter's work peels away illusions to reveal the matter–of–fact nuances of his and our lives." —Publishers Weekly

"These magazine pieces reflect the author's wide range of experience and interests as well as his prose mastery . . . Taken together, these pieces attest to a true life, a life well–lived and well–written." —Kirkus Reviews