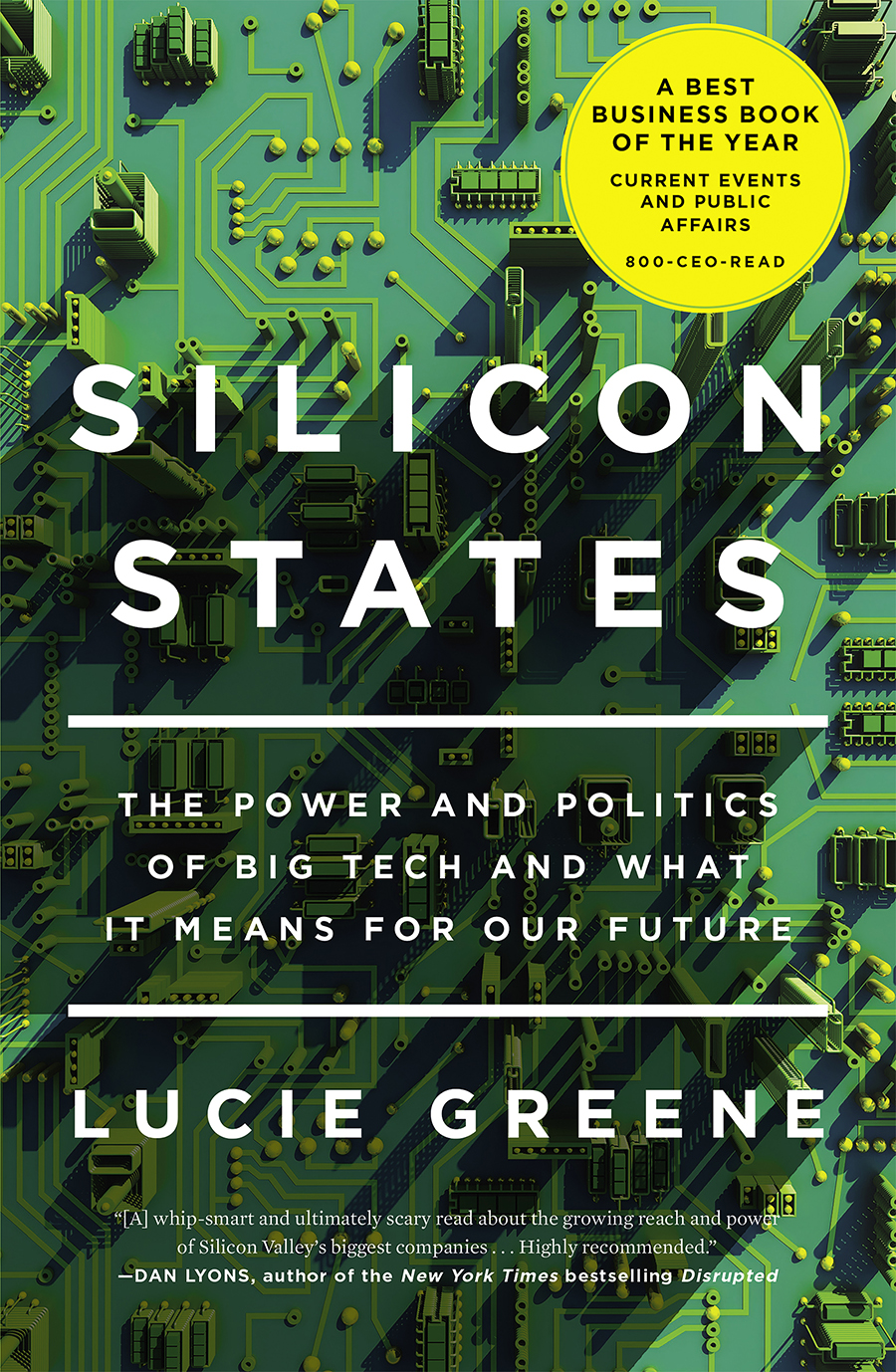 In an era when faith in government and its institutions is quickly eroding, the businesses of Silicon Valley are stepping in to fill the gap. With outsize supplies of cash, talent, and ambition, a small group of corporations have been gradually seizing leadership—and consumer confidence—around the world.

In Silicon States, renowned futurist and celebrated international think–tank leader Lucie Greene offers an unparalleled look at the players, promises, and potential problems of Big Tech. Through interviews with corporate leaders, influential venture capitalists, scholars, journalists, activists, and more, Greene explores the tension inherent in Silicon Valley’s global influence. If these companies can invent a social network, how might they soon transform our political and health–care systems? If they can revolutionize the cell phone, what might they do for space travel, education, or the housing market? As Silicon Valley faces increased scrutiny over its mistreatment of women, cultural shortcomings, and its role in widespread Russian election interference, we are learning where its interests truly lie, and about the great power these companies wield over an unsuspecting citizenry.

While the promise of technology is seductive, it is important to understand these corporations’ possible impacts on our political and socioeconomic institutions. Greene emphasizes that before we hand our future over to a rarefied group of companies, we should examine the world they might build and confront its benefits, prejudices, and inherent flaws. Silicon States pushes us to ask if, ultimately, this is the future we really want.

Lucie Greene is the worldwide director of the Innovation Group, J. Walter Thompson’s in–house futures and innovation think tank. The Innovation Group’s work is frequently cited in publications including The New York Times, Bloomberg Businessweek, The Guardian, WWD, USA Today, and The Times (London). She’s a thought leadership columnist for Campaign, writes for the Financial Times on futures, and has spoken at conferences including CES, SXSW, Web Summit, Cosmoprof, and Ad Week, discussing future trends across multiple lifestyle sectors. She has appeared on BBC, Fox News, and Bloomberg TV as an expert on the future.

A Best Book of the Year So Far (Esquire)
A Book on Social Impact Every CMO Should Read (Forbes)
A Must–Read Book About Tech and Startup Culture (Book Riot)
One of the Most Compelling Books of the Year (Manorama Online)
One of the Books You Need to Read Next (Women.com)
Winner of the 800–CEO–READ Business Book Award in Current Events and Public Affairs

“Via candid interviews with corporate leaders, influential venture capitalists, scholars, journalists, activists, [Greene] explores exactly what’s at stake if we continue to let the largely unregulated Big Tech determine our futures.” —Esquire, One of the Best Books of 2018 (So Far)

“In this entertaining and expertly researched book, renowned futurist and celebrated international think–tank leader Lucie Greene . . . peels back the layers to show us what lies beneath the glossy sheen of technotopia.” —Forbes, 1 of 12 Books on Social Impact Every CMO Should Read

“From perusing Airbnb rentals to reflexively summoning a Lyft, we all take tech’s ubiquity and power for granted. In this book, Lucie Greene describes how Silicon Valley’s spider web of networks has infiltrated all aspects of living. She posits that Silicon Valley is more brand than location, offering insightful prognostications on how technology will continue to shape the everyday. Since flipping the last page of Silicon States, I’ve become more aware of the need to ensure that I own my tech without it owning me.” —Rhett Power, Forbes, One of the Best New Books on Silicon Valley

“Silicon States couldn't come at a better time. Author Lucie Greene shines lights on the issues in the tech world, how the government has gotten involved, and what that means for us.” —Women.com, One of Five Books You Need to Read Next

“A thought–provoking tech–focused tome, filled with female voices that are often notable by their absence in the 'who can shout the loudest' bubble of marketing, tech writers and self–appointed 'visionary leaders.'“ —Campaign

“At this point it seems self–evident that as the major technology companies like Facebook, Uber and Google continue to grow, they are gaining more influence over public life, while the ability of regular consumers or even governments to push back is diminishing. In Silicon States: The Power and Politics of Big Tech and What It Means for Our Future, a new book by Lucie Greene, the past and future consequences of this rapid change are laid out . . . The book is a bracing read, and arguably her expertise makes her well–suited to write insightfully about the biggest brands with the most consumers. Silicon States is a book fundamentally about the danger of concentrating so much power in so few hands.” —Longreads

“If you have even the faintest interest in how the biggest tech issues might play out over the next five years, Silicon States: The Power and Politics of Big Tech and What It Means for Our Future, published by Counterpoint Press, is well worth your time. Its author, the futurist Lucie Greene, skilfully negotiates some of the big issues (present and future) that the tech industry has saddled us with.” —The Irish Independent

“Greene looks at the ways in which multinational tech giants, including Apple, Google, Amazon, Facebook and others have resisted government regulation while pushing to take over functions traditionally provided by the state . . . An open–eyed analysis of influential technology companies’ ambitions of interest to investors, tech users, and media consumers.” —Library Journal

“In Silicon States, futurist Lucie Greene delivers a whip–smart and ultimately scary read about the growing reach and power of Silicon Valley’s biggest companies. Companies like Google, Apple, Facebook, and Amazon leap ahead so swiftly that regulators can’t keep up with them. Left to their own devices, tech titans are transforming every industry and shaping the future. What will that mean for the rest of us? Highly recommended.” —Dan Lyons, author of the New York Times bestselling Disrupted: My Misadventure in the Start–Up Bubble and contributing writer of the HBO series Silicon Valley

“Timely and important. If you're not scared by Big Tech yet, you will be after reading this.” —Rowland Manthorpe, technology correspondent for Sky News and former senior editor of Wired UK

“An excoriating look at the new masters of our universe. For anyone who has ever cursed Facebook, spent too long on Instagram, been trolled on Twitter, or bought too many Apple products, this book is for you. Read it, and join the resistance.” —Tiffanie Darke, editor in chief, A+E Networks

“Lucie Greene’s lively, engaging narrative delivers essential, thought–provoking truths about Big Tech’s influence and impact that will make you look at the world—and our emerging future—in a whole new way.” —Robert Safian, founder of The Flux Group and former editor of Fast Company

“Can Silicon Valley fix the world? Can it even fix itself? With wild ambition and limitless hubris, America’s tech titans are rethinking and reinventing everything in sight. But they can’t always be bothered to think it through, so Lucie Greene has taken on the task—and the future she sees is not exactly Utopia. Silicon States can hardly be more timely.” —Frank Rose, author of The Art of Immersion
Don't miss news & events from Counterpoint Press.
Subscribe to the newsletter today.