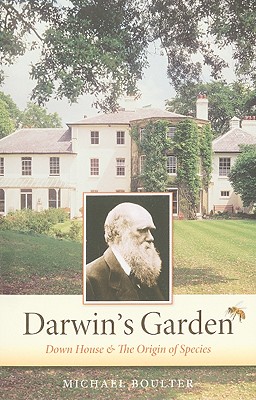 Down House and the Origin of Species

Five years after returning from his trip around the world, young Charles Darwin became the owner of Down House in Kent, England, where he moved his growing family, far away from the turmoil and distractions of London. He would live there for the rest of his life, and it would become the place where he began work on his masterpiece, On the Origin of Species.

For almost twenty years, he used the garden around him as a laboratory. In the orchard, he conducted experiments on pollination. He built a dovecote where breeding new strains of pigeons helped him understand the intricacies of generation. On his daily walk along the sandbank, he observed how plants competed for survival. In solitude he struggled with the ideas of evolution that had haunted him since his voyage, which, in turn, gave him the courage to publish his revolutionary ideas.

Bringing Darwin’s garden to the present day, Boulter unfolds a shining portrait of the formation of one of England’s greatest thinkers and his relationship with the place he loved, and shows how his experiments—conducted more than 150 years ago—are still revealing new proofs as we continue to search for the origins of life.

Michael Charles Boulter is a professor for paleobiology at the Natural History Museum and the University of East London.

Praise
"Reveals the man of his time as well as the scientific thinker far ahead of it." —Publishers Weekly

"[A]n absorbing book. From the primroses and hot house at Down House, [Boulter] leads us on a voyage not only around Darwin's thought, but that of his contemporaries and modern biology." —Sunday Telegraph (London)

"An engaging and fascinating tour through the life and the work of Darwin—and what Darwin's legacy means for our view of the world." —Professor Sir Peter Crane, Former Director of the Royal Botanic Gardens, Kew

"The ideas explored are thought–provoking, and there can be no doubt that the garden at Down had an extremely important role in Darwin's work." —Nature (International Weekly Journal of Science)