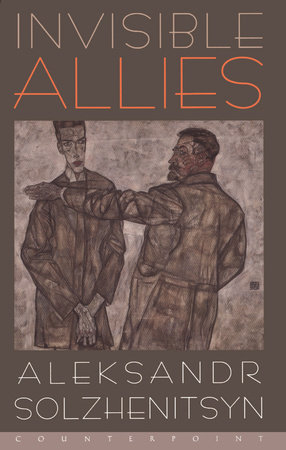 After his expulsion from Russia, Aleksandr Solzhenitsyn secretly worked on a memoir that would acknowledge the courageous efforts of the people who hid his writings and smuggled them to the West. Before the fall of Communism, the very publication of Invisible Allies would have put these friends in jeopardy.

Now we are finally granted an intimate account of the extensive, ever-shifting network of individuals who risked life and liberty to ensure that Solzhenitsyn’s works were kept safe, circulated in samizdat, and “exported” via illicit channels. These imperiled conspirators, often unknown to one another, shared a devotion to the dissident writer’s work and a hatred of the regime that brought terror to every part of their lives. The circle included scholars and fellow writers and artists, but also such unlikely operatives as an elderly babushka who picked up and delivered manuscripts in her shopping bag.

With tenderness, respect, and humor, Solzhenitsyn tells us of the fates of these partners in intrigue: the women who typed distribution copies of his works late into the night under the noses of prying neighbors; the correspondents and diplomats who covertly carried the microfilmed texts across borders; the farflung friends who hid various drafts of Solzhenitsyn’s works anywhere they could–under an apple tree, beneath the bathtub, in a mathematics professor’s loft with her canoe. In this group of deftly drawn portraits, Solzhenitsyn pays tribute to the anonymous heroes who evaded the KGB to bring The Gulag Archipelago and his many other works to the world.