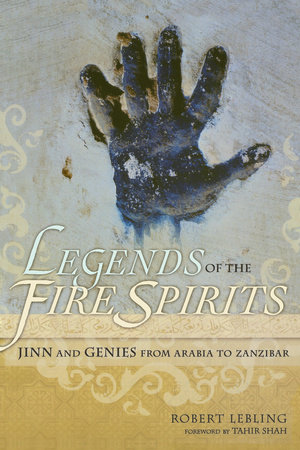 Legends of the Fire Spirits

Jinn and Genies from Arabia to Zanzibar

When Westerners think of a genie, the first image that comes to mind may be Barbara Eden in her pink harem pants or the illuminated blue buffoon from the animated Disney film Aladdin. But to the people of the Arab and Islamic worlds, the picture is dramatically different. Legends of the Fire Spirits looks beyond Westernized caricatures to immerse the reader in the vibrant lore of the jinn—the wondrous, often troublesome, and sometimes terrifying spirit beings of ancient Arab and Islamic tradition.

Robert Lebling delves into long–lost accounts, medieval histories, colonial records, anthropologist’s reports, and traveler’s tales to explore the origin and evolution of legends that continue to thrive in the Middle East and beyond. He cuts through centuries of Orientalists’ cultural presumption to craft a study that stands apart from the overwhelming body of literature concerned with religion in the Middle East.

A captivating synthesis of history and folklore, this is the most diverse collection of jinn lore ever assembled in one volume. From ancient scriptures to The Arabian Nights and beyond, and with a foreword by acclaimed filmmaker Tahir Shah, Lebling has constructed a comprehensive account that not only transcends geographical borders but also spans some four millennia.

Robert Lebling has lived and worked as a journalist in Egypt, Lebanon, the United Kingdom, and the United States, and is the author (with Donna Pepperdine) of Natural Remedies of Arabia. Married with two daughters, he is currently a writer and communications specialist based in Saudi Arabia.

Robert Lebling has lived and worked as a journalist in Egypt, Lebanon, the United Kingdom, and the United States, and is the author (with Donna Pepperdine) of Natural Remedies of Arabia. Married with two daughters, he is currently a writer and communications specialist based in Saudi Arabia.

Praise for Legends of the Fire Spirits

"The most complete compendium of research on the jinn to date." —UFO Digest

"Legends of the Fire Spirits is a long overdue compendium of the knowledge and history of the jinn. It will enrich the reader's knowledge of human history more than one might imagine. The book also can serve as a lifelong reference to the mysteries of the Middle East and their influence on both Western and Eastern cultures." —Arab News

"Robert Lebling's exhaustive and very readable account of jinn lore and legends traces the fascinating history of these strange beings . . . Mortals interested in knowing more about these magical creatures must content themselves with Lebling's absorbing study." —Times Literary Supplement

"A fantastic introduction to a big Middle Eastern subject—the belief in Jinn, spirit people who live in parallel to us yet are invisible to humans. Most cultures have had traditions about 'little people' or something similar, but in the West we've pretty much ruled it out—"Faires at the bottom of the garden." . . . Perhaps the fairies aren't at the bottom of the garden after all, but right next to us. An excellent read—highly recommended." —Jason Webster, author of the Max Cámara detective novels
Don't miss news & events from Counterpoint Press.
Subscribe to the newsletter today.