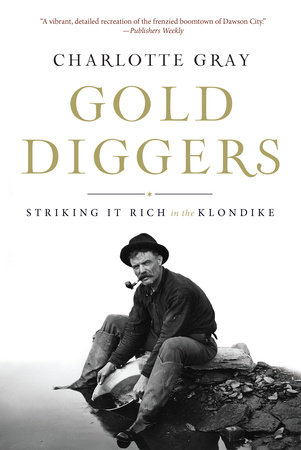 Striking It Rich in the Klondike

Between 1896 and 1899, thousands of people lured by gold braved a grueling journey into the remote wilderness of North America. Within two years, Dawson City, in the Canadian Yukon, grew from a mining camp of four hundred to a raucous town of over thirty thousand people. The stampede to the Klondike was the last great gold rush in history.

Scurvy, dysentery, frostbite, and starvation stalked all who dared to be in Dawson. And yet the possibilities attracted people from all walks of life—not only prospectors but also newspapermen, bankers, prostitutes, priests, and lawmen. Gold Diggers follows six stampeders—Bill Haskell, a farm boy who hungered for striking gold; Father Judge, a Jesuit priest who aimed to save souls and lives; Belinda Mulrooney, a twenty–four–year–old who became the richest businesswoman in town; Flora Shaw, a journalist who transformed the town’s governance; Sam Steele, the officer who finally established order in the lawless town; and most famously Jack London, who left without gold, but with the stories that would make him a legend.

Drawing on letters, memoirs, newspaper articles, and stories, Charlotte Gray delivers an enthralling tale of the gold madness that swept through a continent and changed a landscape and its people forever.

Charlotte Gray is the author of several award–winning works of nonfiction, including Sisters in the Wilderness and Reluctant Genius: The Passionate and Inventive Mind of Alexander Graham Bell. She lives in Ottawa.