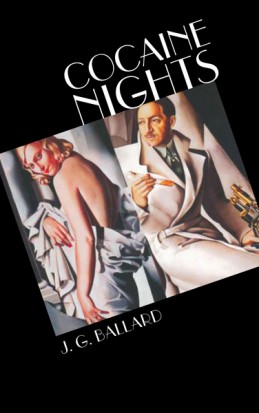 From the iconic author of Crash and Empire of the Sun, Cocaine Nights features a man who finds himself drawn into a network of drugs, pornography, and murder in a Spanish resort.

The remarkable bestseller from one of the giants of modern British literature–at once an engrossing mystery and an unnerving vision of a society coming to terms with a life of unlimited leisure. When Charles Prentice arrives in Spain to investigate his brother’s involvement in the death of five people in a fire in the upmarket coastal resort of Estrella de Mar, he gradually discovers that beneath the civilised, cultured surface of this exclusive enclave for Britain’s retired rich there flourishes a secret world of crime, drugs and illicit sex . What starts as an engrossing mystery develops into a mesmerising novel of ideas–a dazzling work of the imagination from one of Britain’s most original and controversial novelists.

J. G. Ballard was born in Shanghai in 1930 and lived in England from 1946 until his death in London in 2009. He is the author of nineteen novels, including Empire of the Sun, The Drought, and Crash, with many of them made into major films.

"A bit of metaphysical terrorism as carefully planned and executed as [a] fatal blaze." —Washington Post

"[Ballard's] bleak picture of trouble in paradise has the ring of truth." —Publishers Weekly

"Cocaine Nights comes at you like a conventional 'all–is–not–as–it–seems' whodunit. But all is not as it seems. Under the light crust of gentility lies a familiar Ballard landscape of sociopathic violence, transgressive sex and the inevitable pornographic web that lies in between . . . There is nothing quite like a J. G. Ballard novel." —The Guardian