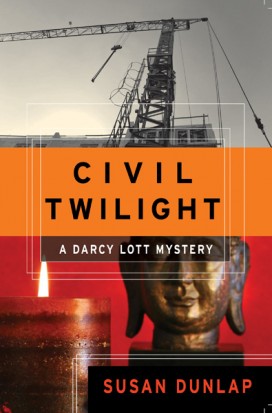 San Francisco stunt double Darcy Lott specializes in creating the illusion of serious danger. But when her lawyer brother calls and asks her to wine and dine a mysterious client, the danger is no illusion.

Darcy takes an instant liking to the client, Karen Johnson, but there are too many unanswered questions. Karen claims to be getting a divorce, but Darcy’s brother Gary doesn’t handle divorces. And when he insists that their older brother John, a cop, must not know of their meeting, Darcy’s red flags are raised. Who is this woman? And why does she need a high–powered lawyer?

Soon, a murder shocks the city and John is the primary suspect. With John and Gary both in hiding and the police anxious to pin the death on John, Darcy finds herself with no one she can trust. Desperate for an end to the madness, she delves deep into Karen’s past, only to uncover a scheme even more shocking than murder itself.