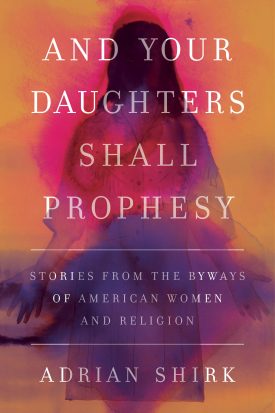 And Your Daughters Shall Prophesy

Stories from the Byways of American Women and Religion

“Shirk is a generous writer whose penchant for detail and poetic observation will surprise even the staunchest skeptic.” –Juan Vidal, NPR’s “Best Books of 2017” “Shirk writes with sincerity. In these stirring vignettes, she mixes historical accounts, interpretations, and fictionalized encounters to provide insight into her personal journey tracing the steps of American women who have sought out an alternative spirituality.” —Publishers Weekly “Shirk’s first book examines and exalts the often overlooked histories of religious movers and shakers . . . and offers as a timely antidote to our culture’s current schism between fundamentalist conservatism and radical progress . . . Divine.” —Bitch And Your Daughters Shall Prophesy is a powerful, personal exploration of American women and their theologies, weaving connections between Adrian Shirk’s own varied spiritual experiences and the prophetesses, feminists, and spiritual icons who have shaped this country. Each woman presents a pathway for Shirk’s own spiritual inquiries: the New Orleans high priestess Marie Laveau, the pop New Age pioneer Linda Goodman, the prophetic vision of intersectionality as preached by Sojourner Truth, “saint” Flannery O’Connor, and so many more. Through her journey, Shirk comes to believe that, as the culture wars flatten religious discourse and shred institutional trust, we should look to the spiritual visions and innovations of women, who, having spent so much time at the margins of religious discourse, illuminate its darkened corners.
About Adrian Shirk

ADRIAN SHIRK was raised in Portland, Oregon, and has since lived in New York and Wyoming. She's a columnist at Catapult, and her essays have appeared in The Atlantic and other publications. She has produced radio stories for Wyoming Public Media and Pop Up Archive, and she holds an MFA in nonfiction from the University of Wyoming in Laramie. Currently, she teaches women's studies and creative writing at Pratt Institute. She lives on the border of the Bronx and Yonkers with her husband, Christopher Sweeney, and Quentin the cat.

Praise
Praise for And Your Daughters Shall Prophesy An NPR Best Book of 2017 "The book doubles as a catalogue of America's 'divergent prophetesses' such as Mary Baker Eddy, the founder of Christian Science, the astrologer Linda Goodman, and the silver-tongued evangelist Aimee Semple McPherson, who faked her own kidnapping to spend five weeks with her lover. These accounts are brief, vivid portraits of women in the 'spiritual avant-garde' . . . and [Shirk's] wide-ranging curiosity delights." --The New Yorker "And Your Daughters Shall Prophesy is both concerned with what we know too much of--the age-old stories of patriarchal systems stifling the contributions and achievements of American female mystics, religious leaders, and thinkers--and with what we know too little of. Shirk's book is a tender, nuanced search not just for reliable biography, but for a depth of gaze into what those women did, felt, and thought." --Diagram "Readers who enjoy spiritual memoir, little-known facts, and hearty doses of girl power will enjoy this volume. Shirk's memorable prose and unique subject matter make this a valuable read." --Sojourners "A book with such a wide range of subjects might be written by numerous authors, but Shirk authors this collection solo, occasionally adopting different styles and voices . . . Readers could pick and choose essays, but they would be doing themselves a disservice, as the panoply of writing also serves as a memoir of Shirk's life and thought." --Booklist "Shirk writes with sincerity as she calmly details events, observations, and conjectures. In these stirring vignettes, she mixes historical accounts, interpretations, and fictionalized encounters to provide insight into her personal journey tracing the steps of American women who have sought out an alternative spirituality." --Publishers Weekly "By highlighting women like voodoo priestess Marie Laveau, acclaimed astrologer Linda Goodman, the clairvoyant Fox Sisters, and the revolutionary Sojourner Truth, Shirk affirms the power of women's voices and visions." --Signature "This book is a pilgrimage. It takes us across the country, following in the footsteps of women who heard callings, strange knocks on the walls, and the voice of God. These spiritual geniuses shaped America's path, and were often disregarded as kooks or charlatans by both the religious and secular world. Shirk treats these women with compassion and restores their dignity, while also candidly and with good humor exploring her own religious questions. This is a beautiful book written with great wit and a tremendous intelligence." --Jessa Crispin, author of The Dead Ladies Project and Why I Am Not a Feminist: A Feminist Manifesto, founder of Bookslut "And Your Daughters Shall Prophesy is the perfect hybrid of memoir and history. A stunning literary debut that will inspire you to reimagine everything you thought you knew about religion and politics in America. Here, feminism and God, poetic clarity and mental illness, love and spiritual questing, all come together like old friends who've missed each other for too long. Adrian Shirk is one of the great millennial thinkers. Read this book and be exhilarated." --Ariel Gore, author of We Were Witches "Adrian Shirk's ingenious book And Your Daughters Shall Prophesy carries her reader through the wildest ride America has to offer: her religions. Here the Spiritualists' dead, the pageantry of Voudou, the literature and Liturgy of Catholicism meet civil rights, social justice, feminism, ancient blood rituals, and tales of how Hollywood helped birth the first Pentecostal megachurch. Shirk makes all of it magnificently personal and thrilling. Like the best of Patti Smith's Just Kids, Shirk has a bold and irresistible story to tell." --Samantha Hunt, author of The Dark Dark and Mr. Splitfoot "Adrian Shirk's portraits of women prophets and mediums are closely observed and lovingly drawn. Her prose is rich, fresh, always surprising; she cracks words and images open at odd angles to reveal their hidden facets. So, too, with her choice of subjects: by juxtaposing Flannery O'Connor and Mary Baker Eddy, Aimee Temple McPherson and Sojourner Truth, Shirk illuminates unexpected affinities and lines of force connecting American women across history. Her light-suffused, dreamlike language is the perfect medium to capture the spiritual lives of these mystics." --Ellen Wayland-Smith, author of Oneida: From Free Love Utopia to the Well-Set Table "And Your Daughters Shall Prophesy is a powerful, even jubilant, reinterpretation of--and introduction to--female figures from America's strange spiritual history as well as a tough-minded, open-hearted exploration of family mysteries. Full of righteous fire, and full of grace on the level of the sentence, it's a passionate act of recovery that will speak to anyone who's ever been beguiled by the unseen and unsaid." --Carlene Bauer, author of Not That Kind of Girl and Frances and Bernard