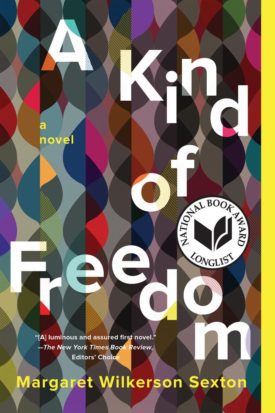 Long–listed for the National Book Award

Winner of the Crook’s Corner Prize

“Brilliantly juxtaposing World War II, the ’80s and post–Katrina present, Sexton follows three generations of a black New Orleans family as they struggle to bloom amid the poison of racism.” —People

Praise
Praise for A Kind of Freedom

"Brilliantly juxtaposing World War II, the '80s and post–Katrina present, Sexton follows three generations of a black New Orleans family as they struggle to bloom amid the poison of racism. The author's deep knowledge of her city and unerring ear for dialogue help bring her unforgettable characters to life." —People

"Sexton’s first novel is set in New Orleans from the mid–1940s to the city’s ruthless real estate makeover years after Hurricane Katrina. Delivered by three accomplished narrators, the story moves through three generations of a black family, starting with the daughter of a pioneering doctor and his Creole wife, who have set themselves against her marrying the hard–working son of a janitor. This moving debut is ingeniously told in its passage back and forth through lives and changing times." —The Washington Post

"Sad, proud, provocative and quietly educational, with dialogue that credibly spans 70 years of black New Orleans vernacular, A Kind of Freedom begs for a screen adaptation. You wait and see." —Newsday

"This wonderful debut by Margaret Wilkerson Sexton explores three generations in the life of an African–American family living in New Orleans, beginning with World War II–era Evelyn and continuing through history by unfolding the lives of Evelyn’s daughter, Jackie, and Jackie’s son, T.C., as well as the continuity of struggles that haunt them all." —Southern Living, One of the Best Books of 2017

"Margaret Wilkerson Sexton’s debut, A Kind of Freedom, a family story set in New Orleans, is really good, too." —Tayari Jones, "A Year in Reading," The Millions

"In her luminous and remarkably assured first novel, A Kind of Freedom, Margaret Wilkerson Sexton . . . shine[s] an unflinching but compassionate light on three generations of a black family in New Orleans who try to make the best choices they can in a world defined at every turn by constraint, peril and disappointment . . . For a debut novelist to take up such charged material is daring; to succeed in lending free–standing life to her characters without yielding an inch to sentimentality—or its ugly twin, pathology—announces her as a writer of uncommon nerve and talent . . . A Kind of Freedom attends to the marks left on a family where its links have been bruised and sometimes broken, but dwells on the endurance and not the damage. The force of this naturalistic vision is disquieting; it is also moving. One could say that it has the disenchanting optimism of the blues." —The New York Times Book Review

"It’s a moving and poignant tale of family history and racial disparity, all told by an author born and raised in Louisiana." —Book Riot

"Sexton’s debut novel is a poignant, deeply emotional and timely exploration of systemic racism in America. Told through the interconnected narratives of three generations of a New Orleans family, the work captures more than seven decades of history in one book without feeling overstuffed. Quite the opposite, actually: You’ll be left wanting to know more about these incredible characters’ circumstances, motivations and dreams, both realized and unfulfilled." —PureWow, One of Nine Books We Can't Wait to Read in August

"[A] powerful first novel, which traces the complex downward spiral of a black family over three generations . . . Despite the struggles, A Kind of Freedom glimmers with hope." —BBC Culture, One of Ten Books to Read in August

"[A] stunning debut novel . . . The book’s greatest strength lies in its characters. Evelyn, Jackie, T.C., and their family and friends are remarkably well developed, creating in the reader a wrenching empathy to their plights . . . A whole–hearted book that couldn’t be timelier, A Kind of Freedom challenges, illuminates, and inspires." —The Riveter Magazine

"... [T]his emotionally wrenching, character–rich debut spans three generations in a city deeply impacted by segregation, economic inequality, and racial tensions... Sexton’s narrative navigates complex topics with an adroit sensitivity that lends sympathy to each character’s realistic, if occasionally self–destructive, motivations. Being able to capture 70 years of New Orleans history and the emotional changes in one family in such a short book is a testament to Sexton’s powers of descriptive restraint. In this fine debut, each generation comes with new possibilities and deferred dreams blossoming with the hope that this time, finally, those dreams may come to fruition." —Publishers Weekly, starred review

"Sexton's debut novel shows us that hard work does not guarantee success and that progress doesn't always move in a straight line." — Kirkus

"Luminous and heartbreaking . . . A Kind of Freedom is a story for our times, and is deserving of a wide readership." —Signature Reads

"Sexton spotlights her generations at moments of potential crisis, then gives each family member room to do the best he or she can. Theirs is unquestionably a story of suffering—and, just as unquestionably, a story of endurance." —Read It Forward, selected for the Jólabókaflóð Holiday Gift Guide

"Superb read! A compassionately told story of four generations in one American family who endure the unpredictable challenges of our rapidly changing society. Bound together through blood ties and love, Sexton’s keenly drawn characters sweep you into a mesmerizing cascade of loss and triumph." —Carol Cassella, author of Oxygen, Healer, and Gemini

"In A Kind of Freedom, Margaret Wilkerson Sexton delivers a fresh and unflinching portrait of African American life and establishes herself as a new and much–needed voice in literature. Vividly imagined and boldly told, A Kind of Freedom is a book for our time. A fierce and courageous debut." —Natalie Baszile, author of Queen Sugar

"Margaret Wilkerson Sexton’s A Kind of Freedom is a brilliant mosaic of an African American family and a love song to New Orleans. Her characters are all of us, America’s family, written with deep insight and devastating honesty but also with grace and beauty. Wilkerson’s stunning debut illuminates the journey of sisters and the generations they bear, the hope they have for the future, and the future still strived for, still deferred, giving us all of this in razor–edged prose that cuts to the quick." —Dana Johnson, author of In the Not Quite Dark and Elsewhere, California

"Margaret Wilkerson Sexton’s A Kind of Freedom is an elegant, captivating, and generous debut novel. I’m still thinking about how our choices are indelibly influenced by our familial histories, whether we’re aware or not, and how the present connects to the past, especially regarding the societal weight of race and class. Through the interweaving of narratives within a family in New Orleans, particularly a matrilineal generation of sisters—from 1944 to the 80s and beyond—Wilkerson Sexton demonstrates the complex web of fate, and how the demands and risks of human longing can be pitted against practicality and upward mobility, muddying the very definitions of success when it comes to survival and love. Our lives are intertwined, Wilkerson Sexton reveals, and despite our best selves and our most loving intentions, heartbreak is often inevitable. With seemingly effortless subtlety and command, Wilkerson Sexton delivers. A Kind of Freedom is multifaceted and beautiful." —Victoria Patterson, author of This Vacant Paradise and The Little Brother

"I give thanks to Margaret Wilkerson Sexton for her remarkable sense of a family's life, from early in its morning to day's end. She interweaves generations of parent–child relations to reveal, with sharp insight, how promise and possibility can sometimes yield to circumstances shaped by the limits to freedom." —Lauret Savoy, author of Trace