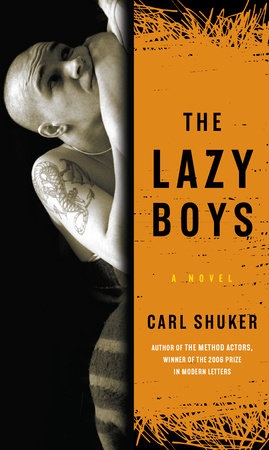 Carl Shuker’s protagonist, Richard Sauer, heads off to college for no reason other than to escape the stultifying normalcy of his middle–class family in Timaru, New Zealand. He may appear ordinary in his aimlessness, mangling his way through his first year in college, but his bonging and banging, his anger and rage, take a brutal turn at an out–of–control dorm party which lands Richey in front of the disciplinary committee with a sexual harassment charge. Dropping out of school before he’s thrown out, Richey and his housemates Matt, Nick, and Ursula begin a freefall that forces Richey to face his most destructive desires.

Sex, violence, mutilation, and drugs fuel the despair and alienation of these disaffected youth — those once innocent but now struggle to find the right combination of alcohol and drugs to keep an all–night buzz. Like a punch in the stomach or a sustained cry, Carl Shuker’s risky and harrowing first person narrative is as visceral as Fight Club and as brutal as A Clockwork Orange. On the surface Richey’s actions are unforgivable, but his unformed and distorted world is immediate and recognizable to a generation brought up in a society indifferent to its own nihilism.</p

Carl Shuker is the author of four novels, including The Method Actors, The Lazy Boys, and Anti Lebanon. The Method Actors won the 2006 Prize in Modern Letters. He works for the British Medical Journal, one of the oldest medical journals in the world. He lived in Tokyo and London for many years and now lives in his home country New Zealand with his wife, the novelist Anna Smaill, and their two children.