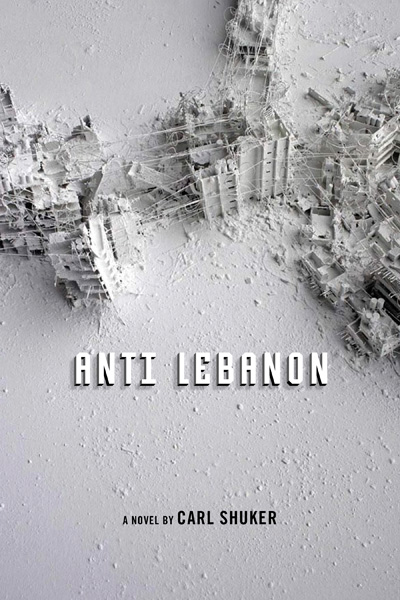 It is Arab Spring and the fate of the Christians of the Middle East is uncertain. The many Christians of Lebanon are walking a knife–edge, their very survival in their ancestral refuge in doubt, as the Lebanese government becomes Hezbollah–dominated, while Syria convulses with warring religious factions. Anti Lebanon is a cross–genre political thriller and horror story embedded within these recent events, featuring a multiethnic Christian family living out the lingering after–effects of Lebanon’s civil war as it struggles to deal with its phantoms, its ghosts, and its vampires.

Leon Elias is a young and impoverished Lebanese man whose older sister had joined a Christian militia and has been killed. He becomes caught up in the recent “little war” in Beirut, when the Shi’a resistance/militia Hezbollah takes over most of the city. In this milieu—the emptied streets of Christian east Beirut, the old shell–scarred sandstone villas, the echoing gunfire—he becomes involved, only partly by choice, in the theft of a seriously valuable piece of artisanal jewelry, and is bitten—like a vampire—by its Armenian maker.

Events take a ghostly and mysterious turn as the factions jostling for power in Beirut begin to align against him and his family, and he is forced to flee the sullied beauty of that wonderful and pitiful country, in this story of love and loss, of the civil war and the Arabization of the “Switzerland of the Middle East,” and of contemporary vampires—beings addicted to violence, lies, and baser primal drives.

Carl Shuker is a remarkable writer. A storyteller in the tradition of Celine and J. G. Ballard, no one alive writes better sentences. Anti Lebanon will delight his fans and entrance anyone new to his fine work.

Carl Shuker is the author of four novels, including The Method Actors, The Lazy Boys, and Anti Lebanon. The Method Actors won the 2006 Prize in Modern Letters. He works for the British Medical Journal, one of the oldest medical journals in the world. He lived in Tokyo and London for many years and now lives in his home country New Zealand with his wife, the novelist Anna Smaill, and their two children.

"Anti Lebanon is an extremely exciting book. It seems to suggest we can go anywhere with the novel, that it can contain anything. It's masterful in its form and the story it tells is compelling, original and important." —Pip Adam, Scoop Review of Books

"One cannot help but be captivated by the slow, mournful mood and atmosphere of Shuker's Beirut. Combining a thriller and a horror story into a single melancholic narrative, Shuker has created a haunting and riveting account of war, loss, and exile." —Publishers Weekly

"Brash and fearless, The Method Actors is a self–consciously postmodern challenge to our perceived reality and its fictional depiction. . . . Virtually every one of his book's 500 pages has something worth lingering over." —NEW YORK TIMES BOOK REVIEW

"A tremendous stylist and a tremendous observer. . . . again and again I stopped to admire particular sentences and paragraphs." —STEPHEN DOBYNS, THE CHURCH OF DEAD GIRLS

"I admire Shuker's bravura attentiveness to the little things as much as I do his shameless and bracing bid for a Pynchonesque grand slam." —GEOFFREY WOLFF, DUKE OF DECEPTION

"It's difficult to convey here the thrill of Shuker's writing, with its up–to–the–minute feel, its endless audacity . . . with its defiant difficulty, sly ambition and writing more than sharp enough to live up to its own hype." —SAM FINNEMORE, THE LISTENER