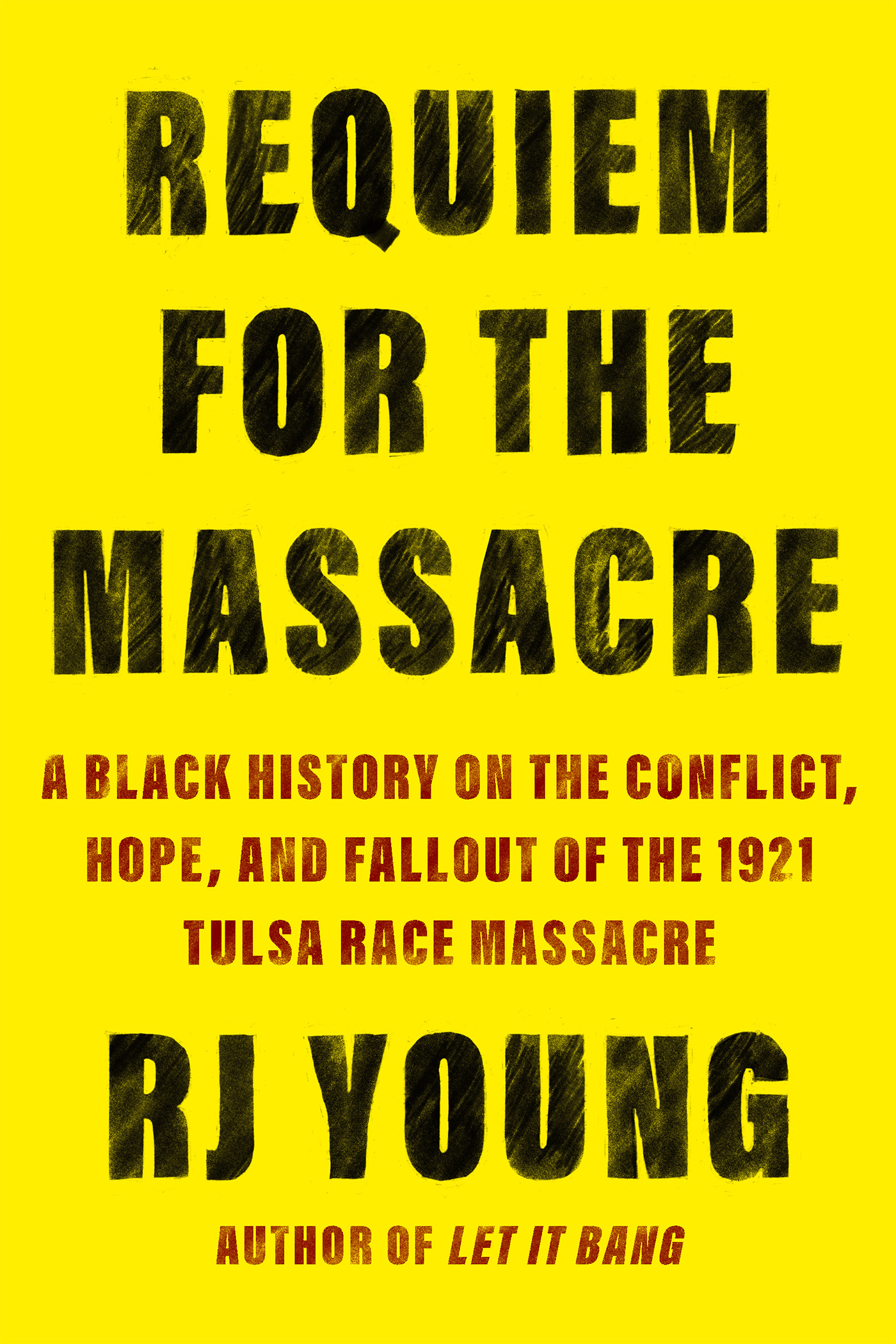 Requiem for the Massacre

A Black History on the Conflict, Hope, and Fallout of the 1921 Tulsa Race Massacre

A Kirkus Reviews Best Book of The Year

With journalistic skill, heart, and hope, Requiem for the Massacre reckons with the tension in Tulsa, Oklahoma, one hundred years after the most infamous act of racial violence in American history

More than one hundred years ago, the city of Tulsa, Oklahoma, perpetrated a massacre against its Black residents. For generations, the true story was ignored, covered up, and diminished by those in power and in a position to preserve the status quo. Blending memoir and immersive journalism, RJ Young shows how, today, Tulsa combats its racist past while remaining all too tolerant of racial injustice.

Requiem for the Massacre is a cultural excavation of Tulsa one hundred years after one of the worst acts of domestic terrorism in U.S. history. Young focuses on unearthing the narrative surrounding previously all-Black Greenwood district while challenging an apocryphal narrative that includes so-called Black Wall Street, Booker T. Washington, and Black exceptionalism. Young provides a firsthand account of the centennial events commemorating Tulsa’s darkest day as the city attempts to reckon with its self-image, commercialization of its atrocity, and the aftermath of the massacre that shows how things have changed and how they have stayed woefully the same.

As Tulsa and the United States head into the next one hundred years, Young’s own reflections thread together the stories of a community and a nation trying to heal and trying to hope.

RJ YOUNG is the author of Let It Bang: A Young Black Man's Reluctant Odyssey into Guns and a national college football writer and analyst at FOX Sports.

"Grapples with what it means to be a Black man living in Tulsa post-Watchmen . . . No matter how many times the tale is told, it never loses its devastating power; the pure and precise savagery is searing." —Martha Southgate, The New York Times Book Review

"In recent years the horrors of the destruction of Greenwood, a thriving Black Tulsa neighborhood, have been resurrected by several authors, filmmakers and showrunners. Young’s account not only relies on survivors’ eyewitness testimony but adds the layer of his own upbringing in Oklahoma. Whether discussing his mother’s support for Trump, the traumas of systemic racism or his early career as a sports journalist, Young reclaims the story of Tulsa’s aftermath from the outsiders who have dominated recent coverage." —Lorraine Berry, Los Angeles Times

"Essential reading for the next hundred years." —Emily Temple, A Literary Hub Most Anticipated Book of the Year

"Young's clear-eyed, first-person narration blazes from the page . . . Unsettling, fierce and necessary, Requiem for the Massacre is a vital primer on a slice of American history that has been hidden for too long." —Shelf Awareness (starred review)

“A unique synthesis of memoir and a history of the 1921 Tulsa Race Massacre. Tulsa native Young, a FOX Sports analyst, offers an ambitious, forceful continuance of his debut memoir, Let It Bang, focused on his development as a consciously Black writer, while dogged by the massacre’s uneasy centennial . . . The author’s prose is consistently acute and his societal analysis, astute . . . An arresting account of Black ambition and endurance from an important new voice in narrative nonfiction.“ —Kirkus Reviews (starred review)

"[A] provocative study of the legacy of the 1921 Tulsa race massacre . . . [Young] skillfully captures the insidious workings of racism. The result is a fierce and poignant portrait of the aftereffects of racial violence." —Publishers Weekly

"At its core, [Requiem For the Massacre] is a memoir that uses [Young's] coming to terms with the 1921 riot to reflect on his journey to understand what it means to be Black in the U.S. and in Tulsa, past and present. More than a personal story emerges from Young’s reflections and immersive journalism; he recreates Tulsa as a place where Black community networking succeeded enough to enrage whites to massacre and suppress that fact for generations . . . This beckons to readers willing to examine whether the centennial of the Tulsa Massacre reflected a reckoning and the substance of change, or was merely a spectacle of lip service." —Library Journal

"RJ Young has written a deeply-researched history of the Tulsa massacre. He rescues an event that has already crossed over for many into myth, returning it to its human origins and reminding us of the toll of its historical afterlives. A foundational book for any student of Black history and Black liberation." ––Kaitlyn Greenidge, author of Libertie

"This fierce book attacks the whole spectrum of racism—from genocide to gentrification—that has colored life in Tulsa, Oklahoma, for a century. Young is a curious and courageous local, and Requiem for the Massacre is his intense account of awakening to the lingering tentacles of the 1921 massacre and wrestling with how to help heal a city." —Ben Montgomery, author of A Shot in the Moonlight

“Requiem for the Massacre is at times overwhelmingly powerful—part exhumation of a horrific past, part exploration of a dangerous present that makes that horror feel not so past at all. RJ Young’s book is a profound examination that’s both historical and deeply personal. It’s an impressive feat—and an incredibly impressive one.” —Will Leitch, author of How Lucky

Praise for Let It Bang

"It's easy to stand outside the fray and criticize the gun-hung whites and radical rednecks defending the Second Amendment. It takes real courage to grab a pistol, head to the range, and try to understand where they're coming from. This is RJ Young's success with Let It Bang." —Ben Montgomery, author of Grandma Gatewood’s Walk

"RJ Young's Let It Bang is a penetrating and personal look at America's gun culture that hits the mark, finding both what brings us together as much as what tears us apart." —Glenn Stout, author of Young Woman and the Sea and series editor, The Best American Sports Writing
Don't miss news & events from Counterpoint Press.
Subscribe to the newsletter today.