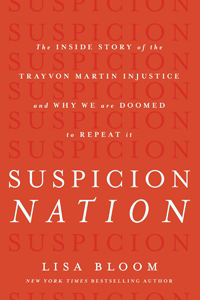 Many thought the election of our first African American president put an end to the conversation about race in this country, and that America had moved into a post–racial era of equality and opportunity. Then, on the night of February 26, 2012, a black seventeen–year–old boy walking to a friend’s home carrying only his cell phone, candy, and a fruit drink, was shot and killed by a neighborhood watch coordinator.

And in July 2013, the trial of Zimmerman for murder captivated the public, as did his eventual acquittal.

In her provocative and landmark book, Suspicion Nation, Lisa Bloom, who covered the trial from gavel to gavel, posits that none of this was a surprise: Our laws, culture, and blind spots created the conditions that led to Trayvon Martin’s death, and made George Zimmerman’s acquittal by far the most likely outcome.

America today holds an unhealthy preoccupation with firearms that has led to the expansion of gun rights to surreal extremes. America now has not only the highest per capita gun ownership rate in the world (almost one gun per American), but the highest rate of gun deaths. Despite the strides America has made, fighting a bloody Civil War to end slavery, eradicating Jim Crow laws, teaching tolerance, and electing an African American president, racial inequality persists throughout our country, in employment, housing, education, the media, and most institutions. And perhaps most destructively of all, racial biases run deep in every level of our criminal justice system. Suspicion Nation captures a court system and a country conflicted and divided over issues of race, violence, and gun legislation.

Lisa Bloom is an award–winning journalist, legal analyst, trial attorney, and is currently the legal analyst for the Today Show and NBC News. A daily fixture on American television for the last decade, Lisa regularly appears on CNN, HLN, and MSNBC. Bloom is also the author of the bestselling Swagger and Think. She has been featured on Oprah, Nightline, Today, Good Morning America, and many other shows. She has written numerous articles for the New York Times, the Los Angeles Times, Huffington Post, the National Law Journal, CNN.com, the Daily Beast, and many more. She has also been profiled, featured, and quoted in hundreds of publications, including the New York Times, the Washington Post, Elle, Ladies' Home Journal, California Lawyer, Vegetarian Times, and Variety. She currently lives in Los Angeles where she runs her law firm, The Bloom Firm.

"A smart, fresh, powerful telling of the trial that riveted our country. Suspicion Nation is a stunning eye–opener about the Zimmerman case –– a 'must–read' for every intelligent American." —Linda Fairstein, New York Times bestselling author

"With the mind of a lawyer and the eye of a journalist, Bloom achieves a remarkable double success: meticulously examining the evidence in this case while also placing the whole Zimmerman saga in a broad historical and cultural context." —Jeffrey Toobin, New York Times bestselling author of The Nine and The Oath

"Lisa Bloom brings her expert legal eye to the lethal cocktail of racial inequality, ludicrously outdated gun laws, and a culture of violence that led to the senseless killing of an unarmed seventeen–year–old boy. Read this book, get angry, and demand change." —Piers Morgan, host of CNN's Piers Morgan Live.

"Suspicion Nation gets to the heart of all matters, both legal and racial. Lisa Bloom has given us a riveting analysis of one of the most profoundly disturbing cases of our time. Don't miss this book." —Marcia Clark, New York Times bestselling author and lead prosecutor, California v. OJ Simpson

"This book is a crusading call for change – and a penetrating inventory of our racially divided country. It is a tribute to Bloom's candor that Suspicion Nation will make readers squirm. Her message has the potential to inspire a national dialogue, if we have the courage to read it." —Jami Floyd, Legal Contributor, Al Jazeera America

"We know that somewhere the Trayvon Martin case went awry, but in Suspicion Nation Lisa Bloom shows us how wrong and reveals a lot we don't know about the case. Like a great civil rights lawyer Lisa has fought the good fight and exposed injustice." —Toure, author of Who's Afraid of Post–Blackness

"Bloom pulls no punches in scrutinizing every misstep and missed opportunity of the state prosecution. She also paints a global picture of the controversy surrounding the not–guilty verdict for Zimmerman, in that it was a clear–cut case of blatant racial profiling to just about everybody around the world except the majority of those on jury duty in that Florida courtroom. . . A much–needed factual antidote to the mainstream media coverage of Trayvon Martin's tragic story and the travesty of the George Zimmerman trial." —Kirkus Reviews

"The first half of Bloom's book, in which she dissects the trial itself, is riveting and quick–paced in the manner of all courtroom dramas. She proposes alternative ways of handling key witnesses and invents a far, far better closing argument than the one prosecutors used. By the time Bloom has taken us through her second theme — the violence and destruction that occur when fear and prejudice meet guns and overly broad self–defense laws — it's hard not to despair as it seems certain there will be more Trayvon Martins in a 'culture where guns blaze and our children fall.'" —Boston Globe

"Suspicion Nation is a thorough evisceration of the amateurish job done by the Florida prosecutors who tried Zimmerman... her analysis of the Zimmerman prosecution's many missteps is a compelling one." —The Los Angeles Times

"Bloom creates a fast–paced courtroom drama that's surprisingly gripping considering how well–known the outcome is, while she relentlessly deconstructs the prosecutors' case against Zimmerman. She ultimately presents a devastating portrait of incompetence. Agree or disagree with Bloom's conclusion, readers nevertheless get an education in the fascinating world of criminal justice. . .Suspicion Nation ends with a stark picture of Americans' attitudes about race and makes an impassioned argument for a more open and honest national discussion about racial prejudice." —Orange County Register