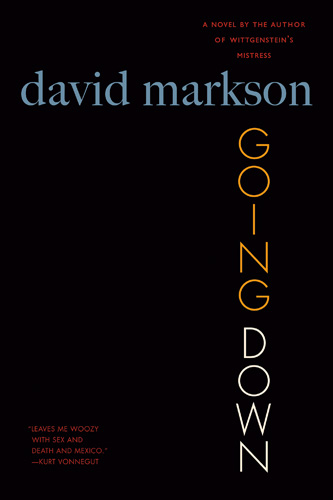 Unlike David Markson’s most recent works, including Vanishing Point and Wittgenstein’s Mistress, which David Foster Wallace described as “pretty much the high point of experimental fiction in this country,” his early novel, Going Down, is a more traditional effort, a masterfully plotted narrative set in Mexico in the 1960s. Three Americans, a man and two women, are living together in obvious intimacy. Their habits, strange to the Mexicans, are strangest of all to themselves.

When Fern Winters’ attention is caught by movement behind a window in a run–down Greenwich Village apartment building, she can’t suspect that her encounter with the apartment’s occupant will eventually lead her to be come upon in an abandoned chapel, in a tiny mountain village—clutching the bloody machete with which one of the three has been murdered.

Going Down is a rarity among novels—brilliantly and poetically written, faultlessly constructed, centered on fully realized people, and yet completely uninhibited in its depiction of startling eroticism.

"A very contemporary, very literate record of despair: all of it in fact seems to be taking place in darkness, in shadows, in the rain, or in the secret criminal places of the heart. . . supremely successful."
Don't miss news & events from Counterpoint Press.
Subscribe to the newsletter today.