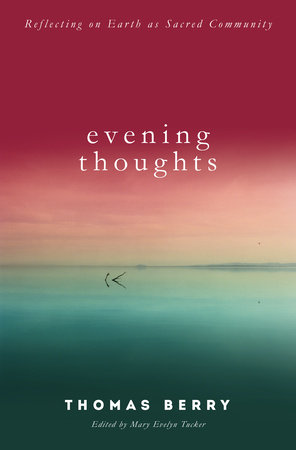 Reflecting on Earth as a Sacred Community

Essays on our spiritual role in the fate of the planet from “the most provocative figure among the new breed of eco–theologians” (Newsweek).

Among the contemporary voices for the Earth, none resonates like that of cultural historian Thomas Berry. His teaching and writings have inspired a generation’s thinking about humankind’s place in the Earth community and the universe, engendering widespread critical acclaim and a documentary film on his life and work.

This new collection of essays, from various years and occasions, expands and deepens ideas articulated in his earlier writings and also breaks new ground. Berry opens our eyes to the full dimensions of the ecological crisis, framing it as a crisis of spiritual vision. Applying his formidable erudition in cultural history, science, and comparative religions, he forges a compelling narrative of creation and communion that reconciles modern evolutionary thinking and traditional religious insights concerning our integral role in Earth’s society.

While sounding an urgent alarm at our current dilemma, Berry inspires us to reclaim our role as the consciousness of the universe and thereby begin to create a true partnership with the Earth community. With Evening Thoughts, this wise elder has lit another beacon to lead us home.

Thomas Berry (1914–2009), one of the leading environmental thinkers in North America, was the director of the Riverdale Center for Religious Research and founder of the History of Religions Program at Fordham University. His other major publications include Evening Thoughts (2006), The Universe Story with Brian Swimme (1992), and The Great Work (1999).

Thomas Berry (1914–2009), one of the leading environmental thinkers in North America, was the director of the Riverdale Center for Religious Research and founder of the History of Religions Program at Fordham University. His other major publications include The Dream of the Earth (1988), The Universe Story, with Brian Swimme (1992), and The Great Work (1999).

Praise for Evening Thoughts: Reflecting on Earth as a Sacred Community

"The wisdom of Thomas Berry is a mountain stream – clear, brilliant, revealing, bracing and sustaining, flowing from deep time and the essential Earth. In these bewildering years, I thirst for Thomas Berry's insights. I drink him in great gulps. I give thanks for the beautiful, inspiring Evening Thoughts, which collects his wisdom and offers it in cupped hands."—Kathleen Dean Moore, author, Riverwalking and coeditor, Moral Ground

"In darkening times Thomas Berry announces the dawn of a new Earth–centered consciousness grounded in a larger view of humankind and a deeper sense of the sacred. Evening Thoughts is a very great gift from a very wise man."—David Orr, counselor to the President, Oberlin College

"If we listen deeply to Thomas Berry's persistent articulation of the voice of the Earth, we can begin to learn to join the Earth Community as the authentic way of fully embodying our humanity."—Tu Weiming, Professor of Philosophy and Dean of the Institute for Advanced Humanistic Studies, Peking University

"One of the great thinkers of our time, Berry offers a vision of intimacy with the Earth as our way to intimacy with each other. This is a marvelous continuation of the Berry canon."—James Gustave Speth, author of America the Possible: Manifesto for a New Economy

"As always, the voice of Thomas Berry manages to be simultaneously calm, sweeping, insistent, particular. It's a voice we badly need to keep hearing."—Bill McKibben, author of The End of Nature"Berry is our conscience, our prophet, our guide. He speaks to what is best within us, in a voice that is inclusive, ecumenical, generous, and wise." –Orion

"The most provocative figure among the new breed of eco–theologians." –Newsweek
Don't miss news & events from Counterpoint Press.
Subscribe to the newsletter today.