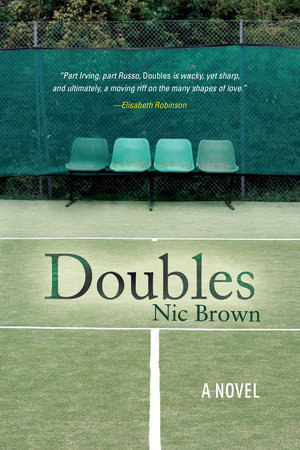 Slow Smith is in a slump. He’s a professional tennis player stuck in his hometown, serving to an empty court. His wife is in a coma and he’s afraid he’s to blame. Left behind are her Polaroids, obsessive daily records of their life together. Meanwhile Kaz, Slow’s lifelong doubles partner, is traveling the world while playing with someone new.

Then one afternoon his old coach Manny appears in a dumpy Fiat convertible and persuades Slow to get in. When they return to Forest Hills — the site of a six–year winning streak — they reunite with old friends who call up long–buried desires and reveal a secret that threatens to destroy Slow’s marriage as well as his friendship with Kaz.

Slow just can’t win — and especially not back on the court. Turns out Kaz can’t either. Theirs is a bond driven as much by odd habits as by shared life experiences — a marriage not unlike the one rendered comatose — and the only way to get their lives back on track is by playing together again.

"Comedic sexual escapades, tender sciences of love and loss—this work from the author of the critically acclaimed Floodmarkers, a series of interconnected stories, has it all . . . This tale of contemporary life should resonant with a popular audience. Brown may be the John Updike for a new generation." —Library Journal (starred review)

"Brown (Floodmarkers) returns with another excellent ensemble character study . . . The story has far more to say about love than tennis, but it ponders a changing sport as it transitions from the world of the impeccably mannered Arthur Ashe to bad boy Andre Agassi with the same care that it examines the inner life of its characters. The result is that rare sports novel with big heart and wide appeal." —Publishers Weekly

"Brown's tale of Slow Smith's two marriages—to his doubles partner and to his wife—is funny, sad, and true. Part Irving, part Russo, Doubles is wacky, yet sharp, and ultimately, a moving riff on the many shapes of love." —Elisabeth Robinson, author of The True and Outstanding Adventures of the Hunt Sisters

"A strange and strangely lovely meditation on friendship and love and loss. Doubles is filled with razor–sharp observation and irreverent wisdom."—Kevin Moffett, author of Permanent Visitors

"This book generates a giddy energy that, after awhile, seems almost life–sustaining. Not loving it is impossible." —Matthew Vollmer, author of Future Missionaries of America

"From the superstitions to the heartbreak, Doubles is a refreshing and surprisingly precise take on the daily grind of the pro tennis tour. What an unbelievable book. I'd play with Slow Smith any day." —Tripp Phillips, 2006 U.S. Open Men's Doubles Semifinalist

"Rarely has a novel captured the absurdities and realities of life as a tennis player as well as Nic Brown has in Doubles." —Travis Parrott, 2009 U.S. Open Mixed Doubles Champion

"Doubles is a brawl. Rambunctious, hysterical, gripping . . . Love demands blood, so does tennis, and Nic Brown nails both." —Rosecrans Baldwin, author of You Lost Me There
Don't miss news & events from Counterpoint Press.
Subscribe to the newsletter today.