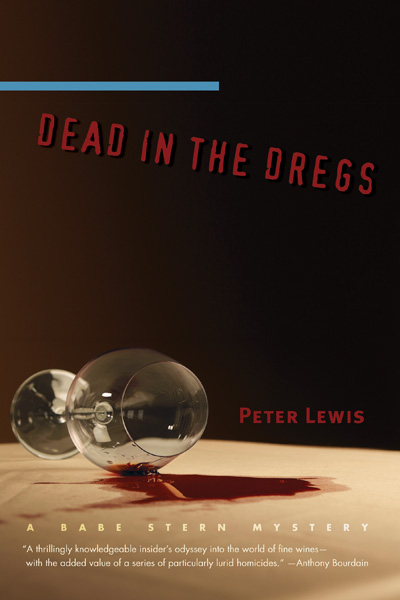 Dead in the Dregs

It’s murder in Napa Valley in this “thrillingly knowledgeable, insider’s odyssey into the world of fine wines [and] . . . particularly lurid homicides” (Anthony Bourdain).

With a stroke of a pen, prominent wine critic Richard Wilson lives to elevate and, more often, destroy winemakers’ reputations. How fitting, his death: found murdered, floating in a vat of a particularly bold Cabernet Sauvignon at a Napa Valley tasting. Who did it? Any vintner whose career was ruined by Wilson’s sour grapes. But when those trail turns cold, Wilson’s sister Janie enlists the help of her ex–husband, Babe Stern. The ex–sommelier turned Sonoma County bar owner is following his own lead—to Burgundy, France.

In cellars and tasting rooms from Beaune to Nuits–Saint–Georges, Stern tracks down a family of vignerons, whose troubled son was interning at the winery the night Wilson died. But it doesn’t end there. And as the investigation uncovers secrets bottled up for years, Wilson won’t be the last to die. In fact, the further Stern digs for the truth, he may be the next.

“An evocative insiders’ tour of French wine country that a tourist will never see” (Seattle Times), restaurateur and former wine columnist Peter Lewis’s juicy mystery is “a rare and engrossing wonder dealing with the murderous grotesqueries of the wine world . . . in an atmosphere of homicide, sex and food” (Jim Harrison, author of Legends of the Fall).

Peter Lewis is a successful restaurateur and restaurant industry consultant. He has been a contributing editor for Virtuoso Travel & Life for which he wrote the column "Wine Country Notebook." His work has also appeared in Pacific Northwest and Arcade. Dead in the Dregs is his first novel. He lives in Seattle.