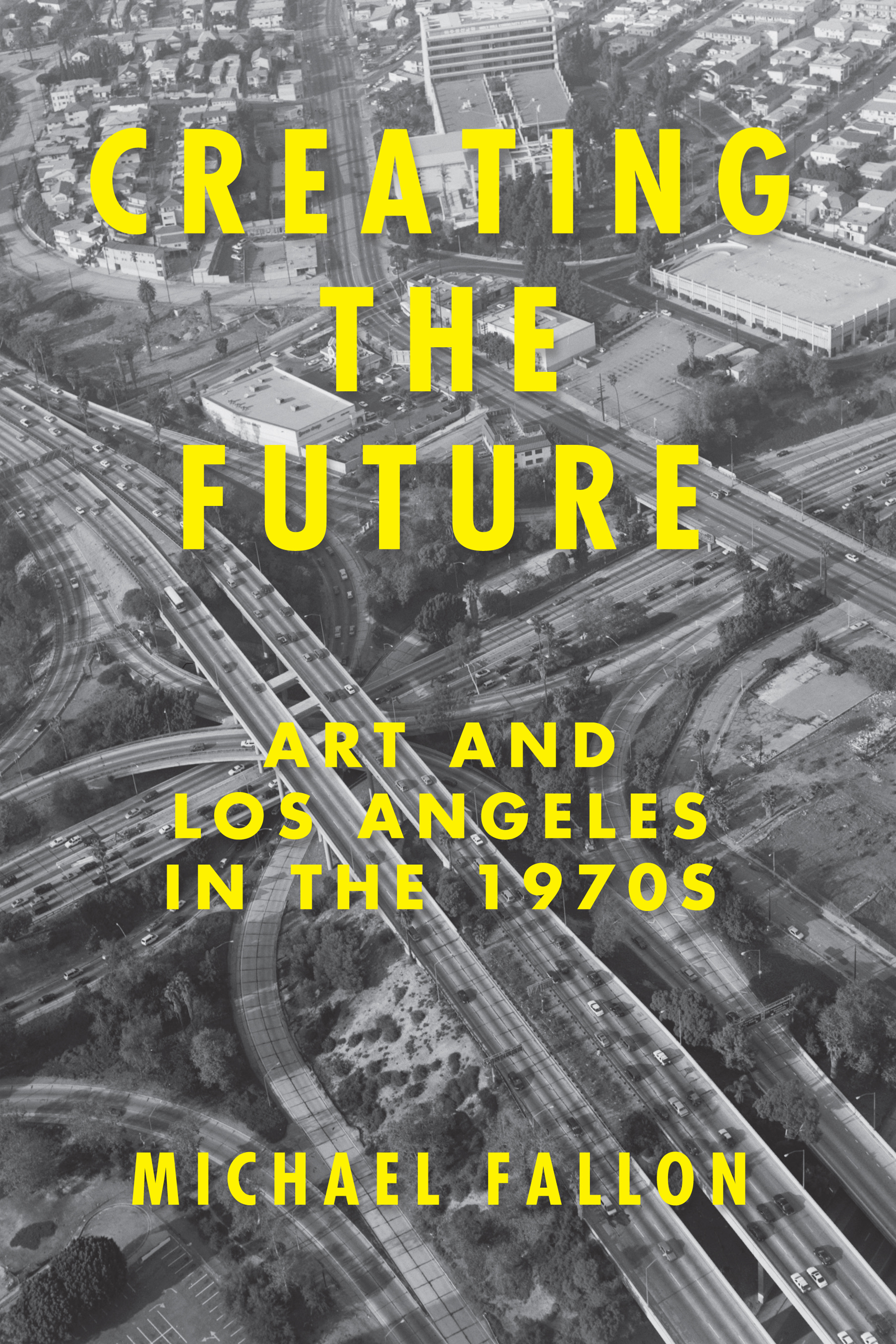 Conceived as a challenge to long–standing conventional wisdom, Creating the Future is a work of social history/cultural criticism that examines the premise that the progress of art in Los Angeles ceased during the 1970s—after the decline of the Ferus Gallery, the scattering of its stable of artists (Robert Irwin, Ed Kienholz, Ed Moses, Ed Rusha and others), and the economic struggles throughout the decade—and didn’t resume until sometime around 1984 when Mark Tansey, Alison Saar, Judy Fiskin, Carrie Mae Weems, David Salle, Manuel Ocampo, among others became stars in an exploding art market. However, this is far from the reality of the L.A. art scene in the 1970s.

The passing of those fashionable 1960s–era icons, in fact, allowed the development of a chaotic array of outlandish and independent voices, marginalized communities, and energetic, sometimes bizarre visions that thrived during the stagnant 1970s. Fallon’s narrative describes and celebrates, through twelve thematically arranged chapters, the wide range of intriguing artists and the world—not just the objects—they created. He reveals the deeper, more culturally dynamic truth about a significant moment in American art history, presenting an alternative story of stubborn creativity in the face of widespread ignorance and misapprehension among the art cognoscenti, who dismissed the 1970s in Los Angeles as a time of dissipation and decline.

Coming into being right before their eyes was an ardent local feminist art movement, which had lasting influence on the direction of art across the nation; an emerging Chicano Art movement, spreading Chicano murals across Los Angeles and to other major cities; a new and more modern vision for the role and look of public art; a slow consolidation of local street sensibilities, car fetishism, gang and punk aesthetics into the earliest version of what would later become the “Lowbrow” art movement; the subversive co–opting, in full view of Pop Art, of the values, aesthetics, and imagery of Tinseltown by a number of young and innovative local artists who would go on to greater national renown; and a number of independent voices who, lacking the support structures of an art movement or artist cohort, pursued their brilliant artistic visions in near–isolation.

Despite the lack of attention, these artists would later reemerge as visionary signposts to many later trends in art. Their work would prove more interesting, more lastingly influential, and vastly more important than ever imagined or expected by those who saw it or even by those who created it in 1970’s Los Angeles. Creating the Future is a visionary work that seeks to recapture this important decade and its influence on today’s generation of artists.

"While the closure of the Ferus Gallery in 1966 and subsequent events such as Artforum's move to New York City in 1967 seemed like crushing setbacks to Los Angeles's art scene at the time, Fallon proves the contrary in this lively history of artistic pluralism and dissidence. Fallon, an arts and culture writer based in Minneapolis, casts a wide net over avant–garde and populist art movements to demonstrate that Angelino art in the '70s remained as fresh, radical, and influential as ever, if not more so." —Publishers Weekly

"Seldom does a book about art so fully capture not only the ways in which history, culture, geography, and personality intersect to create art, but also insight into how art both defines and influences our society.…well–researched, deftly told story…" —Public Art Review

"Michael Fallon performs a double service with Creating the Future: He contradicts the notion that artistic activity in southern California lost its mojo after the 1960s, and he makes the argument by identifying and connecting all the myriad dots, compiling a thorough, vivid history. With a supple perspective, focusing here, pulling back there, Fallon promulgates the sense that L.A. and its environs constituted one of the most challenging and exciting places to make art throughout the latter half of the 20th century, "me decade" or no." —Peter Frank

"…a valuable record…Read it and plan on finishing with a more nuanced and insightful view of Los Angeles culture." —The Huffington Post

"Michael Fallon interweaves dozens of biographies to tell the tale of the most formative decade that the Los Angeles Art Scene will ever know. After the clubby Ferrus gallery was shuttered, the only artists left to lead Los Angeles were the outsiders. Artists as disparate as Judy Chicago, Robert Williams, Bas Jan Ader, and Llyn Foulkes each take the spotlight as Fallon brings to life a time when innovation mattered more than money. The earnestness of the author's lean prose should create a hunger and wistfulness for authenticity in the heart of every serious art lover." —Mat Gleason, Coagula Art Journal, Huffington Post Arts

"Unfairly maligned as a cultural wasteland, the Los Angeles of the 1970s was actually home to a stunning array of artists and art scenes that channeled the disillusionment of the era — and the myriad challenges of life in the sprawling, smog–choked city — into work that was powerful, enduring, and profoundly influential. Kudos to Michael Fallon for shining a brilliant and well–deserved spotlight upon this fascinating period." —Dan Epstein, author of Stars and Strikes: Baseball and America in the Bicentennial Summer of '76 and Big Hair and Plastic Grass: A Funky Ride Through Baseball and America in the Swinging '70s

"A well–researched, wide–ranging history that amply captures the confusion, contradictions and enormous energy of one triumphant decade." —Kirkus
Don't miss news & events from Counterpoint Press.
Subscribe to the newsletter today.