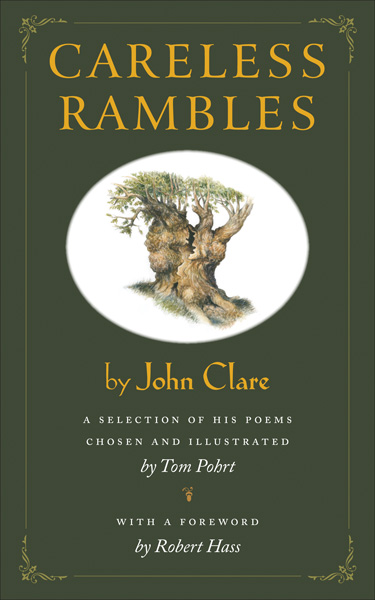 A Selection of His Poems Chosen and illustrated by Tom Pohrt

Born in 1793, John Clare lived and worked during the Golden Age of British poetry, the time of Shelley, Byron, Keats, and Coleridge. In the grand tradition of English nature writing, he stands alongside Wordsworth as a poet of extraordinary humanity and great spirit. Clare was 18 years old when the first Luddite riots occurred. He was deeply resistant to the first years of England’s Enclosure, and he offers a contemporaneous look at what the world was like for those struggling with the impact of the first Industrial Revolution. Uneducated but remarkably well read, Clare was briefly celebrated in London, only to spend his final years in a lunatic asylum. He died in one on May 20, 1864, almost exactly one year before William Butler Yeats was born and the world set out on the path to Modernism.

As James Reeves, an early critic and admirer, has said, “The existence of Clare the poet is, of course, a miracle . . . This is its most precious gift. Clare was a happy poet; there is more happiness in his poetry than in that of most others. This was no mere animal contentment of body and senses, but a quiet ecstasy and inward rapture. Such happiness is not to be had except at a price.”

Tom Pohrt’s drawings and watercolors have been widely admired. There are few alive whose sensibility more properly matches Clare’s—it’s as if Samuel Palmer had taken the commission to illustrate a selection of the peasant poet. Pohrt has himself made the selection of poems from the vast quantity that survived Clare’s chaotic life. Robert Hass joins the project to place Clare’s work in the larger context of nature poetry in the West. The result is a book sure to please those who know already of Clare’s fine poems and those for whom this book will be their exciting introduction.

Tom Pohrt is a self–taught artist who has been published in more than sixteen books and various periodicals. He has traveled extensively in Cuba since 1999, where he and his wife were married in her hometown of Ciego de Avila in 2002. He lives in Ann Arbor, MI.