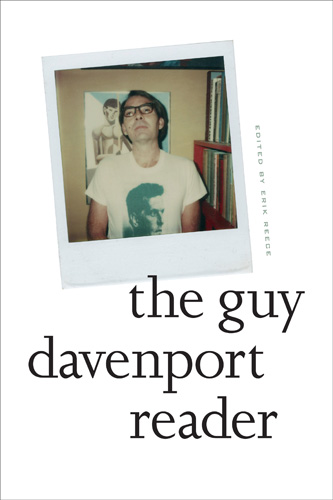 “The difference between the Parthenon and the World Trade Center, between a French wine glass and a German beer mug, between Bach and John Philip Sousa, between Sophocles and Shakespeare, between a bicycle and a horse, though explicable by historical moment, necessity, and destiny, is before all else a difference of imagination.

The imagination is like the drunk man who has lost his watch, and must get drunk again to find it. It is as intimate as speech and custom, and to trace its ways we need to re–educate our eyes.”—Guy Davenport

Modernism spawned the greatest explosion of art, architecture, literature, painting, music, and dance of any era since the Renaissance. In its long unfolding, from Yeats, Pound and Eliot to Picasso and Matisse, from Diaghilev and Balanchine to Cunningham and Stravinsky and Cage, the work of Modernism has provided the cultural vocabulary of our time.

One of the last pure Modernists, Guy Davenport was perhaps the finest stylist and most protean craftsman of his generation. Publishing more than two dozen books of fiction, essays, poetry and translations over a career of more than forty years, he was awarded a MacArthur Fellowship in 1990. In poetry and prose, Davenport drew upon the most archaic and the most modern of influences to create what he called “assemblages”—lush experiments that often defy classification. Woven throughout is a radical and coherent philosophy of desire, design and human happiness. But never before has Davenport’s fiction, nonfiction, poetry and translations been collected together in one compendium. Eight years after his death, The Guy Davenport Reader offers the first true introduction to the far–ranging work of this neglected genius.

Guy Davenport was a writer, illustrator, teacher, and scholar. He is best known for his modernist-style short stories, but his range of works is wide, spanning poetry, translation, and criticism. He was a professor of English for three decades, having taught at Haverford College and the University of Kentucky.

Hugh Kenner (1923–2003), literary critic and distinguished Joyce scholar, held academic posts at the University of California, Santa Barbara; Johns Hopkins University; and the University of Georgia. He was the author of twenty books, including The Pound Era, Joyce's Voices, and A Homemade World.

"Guy Davenport seems comfortable in any genre... For whatever else he is, Davenport is an entertainer ... to the point of being able to take literary dullards like Kafka and Poe and turn them, too, into charming entertainers."RALPH
Don't miss news & events from Counterpoint Press.
Subscribe to the newsletter today.