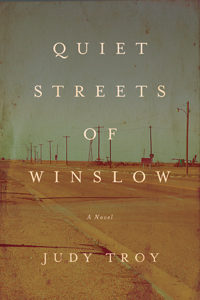 The Quiet Streets of Winslow

When the murdered body of a young woman is found in a river wash in Black Canyon City, Arizona, Deputy Sheriff Sam Rush begins an investigation that leads deeper and deeper into the mystery of her death and the psychological mystery of identity. Nate Aspenall, with whom the young woman had been involved, is forced to confront the facts of her life and his own, and what he may have become with her. Sam Rush confronts the degree to which he is hindered by his assumptions about the Aspenall family, and by the knowledge of his own isolation. And Travis Aspenall, Nate’s fourteen–year–old stepbrother, must come to grips with what love and sex do to people, what choices they make when threatened with loss, and how to figure out what you’re left with when what you thought you knew and trusted has been thrown into question.

As the investigation takes Sam north to Winslow and Holbrook and brings Nate home, temporarily, to Black Canyon City, solving the mystery becomes more complicated. Additional suspects emerge. Nobody tells the truth. The victim’s haphazard life was dangerous, and her relationship with Nate anything but straight–forward. As for Nate, his time in Black Canyon City is running out. His family is no longer certain of his innocence. In the midst of this, Travis struggles to grow up.

Set in the gorgeous setting of Winslow, Arizona – where the place becomes a fully realized character in this beautiful story – Judy Troy offers a murder mystery infused with inter–woven love stories and unforgettable voices, a masterful return for this wonderful writer.

Judy Troy is the author of Mourning Doves, which was short–listed for the Los Angeles Times Book Award, West of Venus, a New York Times Notable Book, and From the Black Hills, an ALA Booklist editor's Choice. She won a Whiting Writers' Award in 1996, and lives in Auburn, AL, with her family.

"[A] quiet, intelligent literary whodunit. . .[T]he prose has a poetic sensibility that allows the novel to transcend the mystery genre."—Publishers Weekly
Don't miss news & events from Counterpoint Press.
Subscribe to the newsletter today.