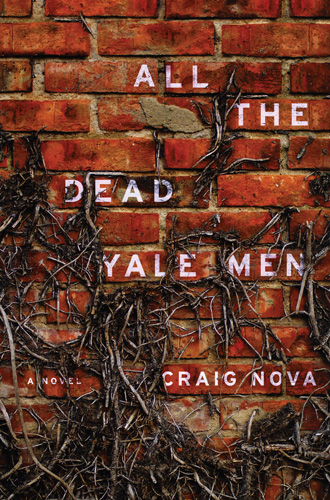 All the Dead Yale Men

Originally published in 1982 to wide acclaim, The Good Son remains Craig Nova’s undisputed masterpiece. This classic explored the complicated entanglements of fathers and sons —expressed in the story of nouvue–riche father Pop Mackinnon, who used his wealth to manipulate his son Chip into the ‘right’ kind of marriage upon the young man’s return from World War II.

Chip eventually gave up the love of his life and married to secure his future – and what were the consequences of that decision? All the Dead Yale Men answers that question in telling the story of Frank Mackinnon, son of Chip, a prosecutor in Boston with a happy marriage and a daughter set to follow his footsteps into law school. Chip’s death throws Frank into his family’s legacy, where he must contend with the inheritance of the Mackinnon’s beloved land and a bevy of secrets that dates back three generations. And when Frank’s daughter Pia falls under the sway of local bad boy Aurlon Miller, his grief over his father’s death triggers the family legacy of social standing and manipulation to begin anew, leading Frank to the darkest edges of what a father will do to protect the ones he loves.

All the Dead Yale Men examines the end of an era, how privilege and inheritance often crumble in the face of the modern world, a story enriched by the setting and mythology of Boston and its surroundings. The novel not only moves the Mackinnon’s story forward but will recast historical elements of the classic novel as well, heralding the arrival of a new American classic.

Craig Nova is the award–winning author of twelve novels and one autobiography. His writing has appeared in Esquire, The Paris Review, The New York Times Magazine, and Men's Journal, among others. He has received an Award in Literature from the American Academy and Institute of Arts and Letters and is a recipient of a Guggenheim Fellowship. In 2005 he was named Class of 1949 Distinguished Professor in the Humanities at the University of North Carolina, Greensboro.

Praise for All the Dead Yale Men

"Nova's career–defining 1982 novel The Good Son explored the relationship between a domineering, social–climbing father, Pop Mackinnon, and his loyal but restless son Chip, a World War II veteran who returns home to an arranged marriage. This equally impressive sequel follows Chip's son Frank, now happily married and a Boston prosecutor, after his father's death by stroke unleashes long–buried family secrets and resentments . . . Nova's scenic evocation of Boston is spot–on, as is his emotional detailing of the fragile intricacies of family." —Publishers Weekly (Starred and Boxed)

"'Long–awaited' is an overused phrase in publishers' promotional blurbs, but Nova's follow–up to his acclaimed 1982 novel The Good Son merits that description as much as any recent fiction, and it has been well worth the lengthy wait. Nova now brings forward more than one full generation his account of the Mackinnon family…[their] roots are in a richly described Delaware Valley, but this dark saga is also set in a seamy New England familiar to readers of George V. Higgins' classic The Friends of Eddie Coyle or Geoffrey Wolff's Providence. It is told with comparable verve, wit, horror, and beauty—even when vulgar, even repellent—and with images and set pieces that will haunt the reader long after they've put the book down. This gripping and intelligent chronicle of love, legacy, and betrayal (the title may suggest a genre mystery, which this surely isn't) captures a complex clan entangled in a questionable moral universe. Nova's Mackinnons, both here and in The Good Son, leave their edgy mark on the modern American literary landscape." —Booklist (Starred)

"The Good Son was a wonderful meditation on ambitions, love, and parenthood. All the Dead Yale Men takes up those themes at the beginning of the new century, when it's as hard as it has ever been to be father… Nova is especially adept at drawing dark characters, and having their darkness creep up and catch you by surprise. He creates a vivid portrait of well–off New England and the Delaware River Valley, with often–moving descriptions of the natural world. Then Nova fills these backdrops with seemingly normal and successful people who become, from one moment to the next, desperate, manipulative and self–destructive . . . fans of The Good Son will enjoy seeing the Mackinnon family's obsessions play out in the noir landscape of the early 21st century." —The Los Angeles Times

"A great novel by one of our great novelists. A pleasure on every page." —Dennis Lehane
Don't miss news & events from Counterpoint Press.
Subscribe to the newsletter today.