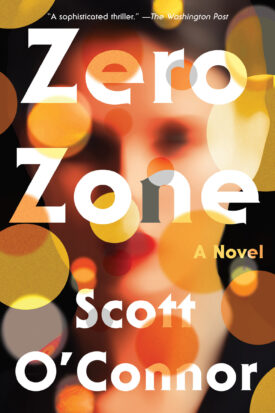 A literary thriller about an infamous desert art installation, the cult it inspired, and the search for a missing young woman that is “cinematic . . . readers will be compelled to start again at page one to discover how O’Connor pieces together his suspenseful, incredibly well–written narrative” (Library Journal, starred review).

Los Angeles, the late 1970s: Jess Shepard is an installation artist who creates environments that focus on light and space, often leading to intense sensory experiences for visitors to her work. A run of critically lauded projects peaks with Zero Zone, an installation at the once upon a time site of nuclear bomb testing in the New Mexico desert. But when a small group of travelers experience what they perceive as a religious awakening inside Zero Zone, they barricade themselves in the installation until authorities are forced to intervene. That violent showdown becomes a media sensation, and its aftermath follows Jess wherever she goes.

Devastated by the attack and the distortion of her art, Jess retreats from the world. Unable to work, Jess unravels mentally and emotionally, plagued by a nagging uncertainty as to her culpability for what happened.

Three years later, a survivor from Zero Zone comes looking for Jess, who must move past her self imposed isolation to face down her fears and recover her art and possibly her life from a violent cult intent of making it their own.

SCOTT O’CONNOR is the author of A Perfect Universe: Ten Stories and the novels Half World and Untouchable, which won the Barnes & Noble Discover Award for Fiction. His stories have been short-listed for the Sunday Times/EFG Story Prize and cited as Distinguished in The Best American Short Stories.

“A a sophisticated thriller . . . O’Connor has constructed the plot of Zero Zone as a kaleidoscope, frequently shattering the chronology of events and remixing the parts. That may sound baffling, but it’s compellingly done—a constant process of filling in context and meaning, solving some mysteries and raising others . . . Zero Zone is an engaging reflection on the function of art and the responsibilities of the artist. Following these characters along their circuitous routes offers a rare chance to consider the risks that great creators take when they try to inspire us to action—but not too much.” —Ron Charles, The Washington Post

“A complexly structured novel that evokes the aesthetic thrills and apocalyptic impulses of its time and place as viscerally as a hot Santa Ana wind . . . Zero Zone . . . superbly captures an era when gurus both good and bad were plentiful, conceptual artists risked their own skins and psyches, and art seemed to open new windows on the soul.” —Tom Nolan, Wall Street Journal

“Zero Zone is a pounding thriller that also takes on questions about creation, the ownership of art, and the vague lines of responsibility between those whose lives have been bonded in tragedy.” —Dwyer Murphy, CrimeReads

“Enthralling . . . Plot summaries . . . do not begin to do justice to the author’s measured invitations to join him into the vertiginous worlds his characters inhabit. It’s a combination of a literal ghost story—O’Connor is also an accomplished television writer, and his story arc training serves him well—and a metaphysical attempt to question the ground on which we stand, the air we breathe . . . The creation of his anti–hero Tanner, a pustular prophet with growths all over his body who nevertheless has a mesmerizing effect on those he entices into his orbit, is an amazing achievement. It brings to mind the nightmarish visions of Nathaniel West in Miss Lonelyhearts, with its dark comedy of desolation angels of lost, and sometimes deformed souls and doomed Christian aspirations.” —Paul Wilner, Zyzzyva

“Harrowing, dexterous . . . With a noir tone and a rich assortment of characters whose lives unfold in chapters pared down to their essentials, the novel transforms a would–be abstract meditation on the influence of art into a vital, deeply engaging work. Writing with verve and precision, O’Connor serves up a thoughtful, original thriller.” —Publishers Weekly, starred review

“After finishing this cinematic novel, readers will be compelled to start again at page one to discover how O’Connor pieces together his suspenseful, incredibly well–written narrative.” —Library Journal (starred review)

“The liminal space between art, artist, and audience takes an unexpected, beautiful and haunting form in Scott O'Connor's masterful Zero Zone, which brings to light the intangible thoughts and feelings swirling around an interactive art installation in the desert.” —Mari Carlson, ookPage (starred review)

“Magnetic . . . O’Connor dovetails Jess’s perspective with those of the Zero Zone survivors, excavating the truth like an archaeologist unearthing a skeleton. Recommended for fans of Ann Patchett’s Bel Canto.” —Booklist

“Scott O'Connor's Zero Zone sets itself apart from the literary thriller pack thanks to its highly original premise and empathetic range . . . O'Connor once again plumbs the depths of trauma with careful attention to psychological detail . . . O'Connor excels at sympathetically depicting the extremes of human thought, building careful psychological portraits of characters yearning for something like transcendence . . . While it builds to a suitably harrowing climax, Zero Zone quickly reveals itself to be a meditation on art in the body of a thriller . . . Zero Zone is a surprising literary thriller about art and damaged people in the traumatic aftermath of a cult–like experience at a desert art installation that ended in violence.” —Hank Stephenson, Shelf Awareness

“Zero Zone held me from the first page with its precise prose and willingness to interrogate deeply what art can and cannot do for us—and to us. Scott O'Connor has written a profound novel about the human search for transcendence and meaning in our often alienated and confusing lives—and it's full of suspense and mystery, with a gaze that's wonderfully cinematic. I can't stop thinking about it!” —Edan Lepucki, author of California

“Scott O’Connor’s new novel is a tour de force, an elegy to a lost time and forgotten city—the Los Angeles of the 1970s—which burns with artistic longing and cultural politics that are just as relevant and necessary today. With an innovative structure and a cast of dynamic characters, Zero Zone takes you on a journey that makes the world disappear while opening a new space, a possibility beyond what I thought of. O'Connor will make you feel like a time traveler: you won’t want to go back home; you won’t want this wonderful book to end.” —Rachel M. Harper, author of Brass Ankle Blues and This Side of Providence

“A mesmerizing, prismatic, noir–inflected thriller about the intersection between trauma and art. O’Connor is a clear–eyed, compassionate writer, and this is a dazzlingly human haunted house of a book.” —Ben Loory, author of Tales of Falling and Flying