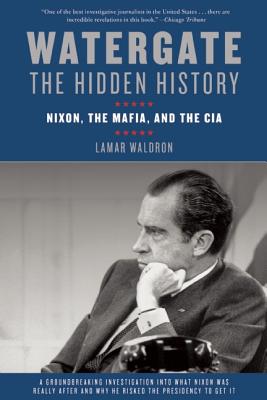 While Richard Nixon’s culpability for Watergate has long been established—most recently by PBS in 2003—what’s truly remarkable that after almost forty years, conventional accounts of the scandal still don’t address Nixon’s motive. Why was President Nixon willing to risk his reelection with so many repeated burglaries at the Watergate—and other Washington offices—in just a few weeks? What motivated Nixon to jeopardize his presidency by ordering the wide range of criminal operations that resulted in Watergate? What was Nixon so desperate to get at the Watergate, and how does it explain the deeper context surrounding his crimes?

For the first time, the groundbreaking investigative research in Watergate: The Hidden History provides documented answers to all of those questions. It adds crucial missing pieces to the Watergate story—information that President Nixon wanted, but couldn’t get, and that wasn’t available to the Senate Watergate Committee or to Woodward and Bernstein. This new information not only reveals remarkable insights into Nixon’s motivation for Watergate, but also answers the two most important remaining questions: What were the Watergate burglars after? And why was Nixon willing to risk his Presidency to get it?

Watergate: The Hidden History reexamines the historical record, including new material only available in recent years. This includes thousands of recently declassified CIA and FBI files, newly released Nixon tapes, and exclusive interviews with those involved in the events surrounding Watergate—ranging from former Nixon officials to key aides for John and Robert Kennedy. This book also builds on decades of investigations by noted journalists and historians, as well as long–overlooked investigative articles from publications like Time magazine, the Los Angeles Times, and the New York Times.

Waldron's work was praised by Ronald Goldfarb, a top Mafia prosecutor for Robert Kennedy in 1963, marking the first time in over twenty years a book about JFK's assassination has been recommended by someone who worked closely with John or Robert Kennedy. Waldron's research has also been endorsed by veteran FBI agent William Turner and noted Kennedy biographer John H. Davis. Waldron's discoveries have also been featured on the History Channel and in Vanity Fair. He received undergraduate and graduate degrees from Georgia State University, and worked in the criminal justice field for seven years before beginning his writing career. THOM HARTMANN (co-author) Thom Hartmann is a best-selling author and national radio host for Air America. Heard by millions of radio listeners daily, Hartmann is the author of 17 books, including The Last Hours of Ancient Sunlight, which helped to inspire Leonardo DiCaprio's recent documentary The 11th Hour, which features Hartmann. His other books include: We the People; Unequal Protection; What Would Jefferson Do, and Screwed: The Undeclared War Against the Middle Class-And What We Can Do About It. Hartmann was prominently featured in countless media outlets, including NPR and BBC radio, CNN television, the front page of The Wall Street Journal, and Time Magazine.
Praise
Praise for Legacy of Secrecy:

"[Legacy of Secrecy contains] over 800 pages of intricately documented data. Their findings add pieces to one of our most perplexing puzzles, and suggest where the key missing pieces may be found." —Ronald Goldfarb, The Daily Beast