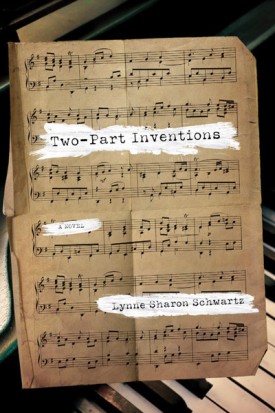 Two–Part Inventions begins when Suzanne, a concert pianist, dies suddenly of a stroke in the New York City apartment she shares with her producer husband Philip. Rather than mourn in peace, Philip becomes deeply paranoid: their life is based on a fraud and the acclaimed music the couple created is about to be exposed. Philip had built a career for his wife by altering her recordings, taking a portion of a song here and there, from recordings of other pianists. Syncing the alterations seamlessly, he created a piece of flawless music with Suzanne getting sole credit.

In this urban, psychological novel, author Lynne Sharon Schwartz brilliantly guides the reader through a flawed marriage and calculated career. Beginning with Suzanne’s death and moving backwards in time, Schwartz examines their life together, and her remarkable career, while contemplating the nature of truth, marriage and the pursuit of perfection.

Lynne Sharon Schwartz is a celebrated author of novels, poems, short fiction, translations from Italian, and criticism. Her short fiction has appeared in the Best American Short Stories annual anthology series several times. The author of The Writing on the Wall, Disturbances in the Field, Referred Pain, Not Now, Voyager, and Two-Part Inventions, Schwartz lives in New York City and is currently a faculty member of the Bennington Writing Seminars.

"The novel offers an intriguing window into the closeted, incestuous world of classical music, where enforced camaraderie and intense competition reside in uncomfortable proximity."—Publishers Weekly

"Loosely based on the true story of an unknown pianist whose recordings made her famous after they were altered and enhanced in the studio by her husband. . .[this] is a painstaking character study and taut modern fable about people who live at the cross–section of art and fame."—Booklist