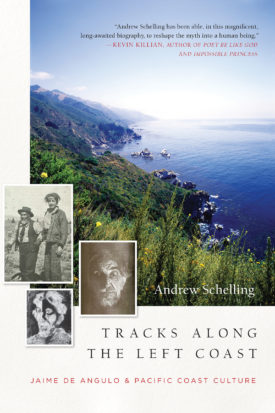 Tracks Along the Left Coast

“Schelling’s biography of Jaime de Angulo–‘cattle puncher, medical doctor, bohemian, buckeroo, ‘ among other things–presents a fascinating, full-bodied portrait of a man and an era, as well as delving deep into California’s Native history. De Angulo’s isn’t a household name, but in Schelling’s work the man called by Ezra Pound the ‘American Ovid’ comes blazing to life in all his singular brilliance.” –Stephen Sparks, Literary Hub California, with its scores of native languages, contains a wealth of old-time stories–a bedrock of the literature of North America. Jaime de Angulo’s linguistic and ethnographic work, his writings, as well as the legends that cloak the Old Coyote himself, vividly reflect the particulars of the Pacific Coast. In each retelling, through each storyteller, stories are continually revivified, and that is precisely what Andrew Schelling has done in Tracks Along the Left Coast, weaving together the story of de Angulo’s life with the story of the land and the people, languages, and cultures with whom it is so closely tied.
About Andrew Schelling

Poet and translator, Andrew Schelling has written or edited twenty books. For more than twenty years he has been on the faculty of Naropa University's Jack Kerouac School, and he also teaches at Deer Park Institute, in Himachal Pradesh, India.