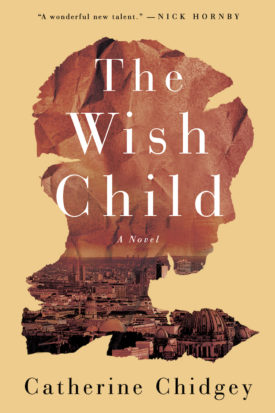 “A remarkable book with a stunningly original twist.” —The Times (London) This international bestselling historical novel follows two children and a mysterious narrator as they navigate the falsehoods and wreckage of WW II Germany

Germany, 1939. As Germany’s hope for a glorious future begins to collapse, two children, Sieglinde and Erich, find temporary refuge in an abandoned theater amid the rubble of Berlin. Outside, white bedsheets hang from windows; all over the city, people are talking of surrender. The days Sieglinde and Erich spend together will shape the rest of their lives.

Watching over them is the wish child, the enigmatic narrator of their story. He sees what they see, he feels what they feel, yet his is a voice that comes from deep inside the ruins of a nation’s dream.

CATHERINE CHIDGEY's debut novel, In a Fishbone Church, won the Betty Trask Prize, Best First Book in the Commonwealth Writers' Prize (Southeast Asia and Pacific Region), and was long-listed for the Orange Prize. Her second novel, The Strength of the Sun, was a New York Times Notable Book of the Year. Sunday Express (UK) called her third novel, The Transformation, "a highly original read, as beautiful as it is terrifying." Chidgey is the recipient of the 2017 Janet Frame Fiction Prize, and lives in Ngaruawahia, New Zealand.

Praise
Praise for The Wish Child Winner of the Acorn Foundation Fiction Prize at the Ockham New Zealand Book Awards "Fiction based on fact can bring to life a place and time as no mere history can--in this case, Germany from 1939 to 1997, concentrating on the war years . . . This beautifully written, vivid picture of one of the darkest times in human history, already an international best-seller, also may serve as a cautionary tale for today." --Booklist (starred review) "Chidgey's understated and poetic revelations of the banalities of day-to-day life under siege, as the German war effort fails, communicate the corrosive horrors of war . . . Chidgey's controlled revelation of the identity of her shadowy narrator gradually illuminates the true horrors endured by the rest of the characters in this devastating work." --Kirkus Reviews (starred review) "Fans of The Book Thief will be drawn to Catherine Chidgey's haunting WWII novel, which is told from the perspective of a similarly unusual and omniscient narrator--though we won't spoil who . . . While The Wish Child fits squarely into historical fiction, its clever, multi-layered format distinguishes itself from the genre pack." --Elena Nicolaou, Refinery29 "The contrast of voices provides a detailed portrait of Siggi and Erich's fractured lives. Fans of The Book Thief will enjoy Chidgey's delicate and elegant novel." --Publishers Weekly "This is an absorbing story, intelligent and literary." --Doug Kemp, Historical Novel Society