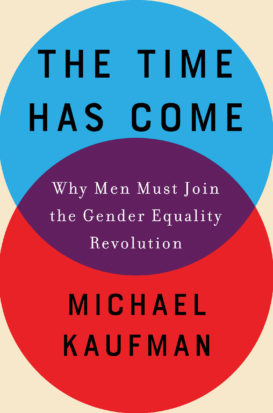 The Time Has Come

Why Men Must Join the Gender Equality Revolution

“For too long the struggle for the rights of women and girls was seen as women’s business. Of course, it’s equally men’s business and stops being such a struggle when it’s seen that way. This reframing gives us a chance to understand violence against women as deeply toxic for us all.” —Phumzile Mlambo–Ngcuka, UN Under–Secretary–General and Executive Director of UN Women

The Time Has Come explores how a patriarchal culture that has given power to men comes at a huge cost to women, children, and, surprisingly, to men as well. It details how very achievable changes in our workplaces, in the ways we raise boys to be men, and in the movement to end men’s violence will bring significant rewards to communities all around the world.

Michael Kaufman is the cofounder of the White Ribbon Campaign—the largest international network of men working to end violence against women—and for decades has been an advisor on gender equality to the United Nations, governments, NGOs, schools, and workplaces around the world. With honest storytelling, compassion, and hard–hitting analysis, The Time Has Come is a compelling look at why men must take a stand in the fight for general equality.

MICHAEL KAUFMAN, PhD has spent almost four decades engaging men to support gender equality in efforts to transform the lives of both women and men. He's the cofounder of the White Ribbon Campaign, the largest international effort of men working to end violence against women. As an advisor and speaker, he has worked across America and in fifty countries with the United Nations, governments, NGOs, and businesses. He grew up in Ohio and North Carolina and lives in Toronto, Canada. He is a senior fellow with Promundo, based in Washington D.C. Kaufman is the author or editor of eight books, including Theorizing Masculinities, Cracking the Armour: Power, Pain and the Lives of Men.

Praise
Praise for The Time Has Come

“There’s never been a better opportunity for gender equality, Kaufman argues. But the work can’t fall to women alone. To galvanize men to join the movement, he challenges expectations around power, parenthood and progress in this timely new book.” —Danielle Groen, Chatelaine, One of the Buzziest Books of the Year

“The Time Has Come calls for men across the political, social, and economic spectrum to speak out about women’s rights . . . Both timely and refreshing, placing the onus on men to amend their perspectives on women and check their male privilege . . . Kaufman’s anecdotes about the significant ways men support one another in the fight against misogyny are incredibly touching and provide good examples of how men can be allies without centering their own experiences . . . A reassuring, empowering guide for men who want to be on the right side of history and welcome a feminist, gender–equal future.” —Foreword Reviews

“The cofounder of the White Ribbon Campaign and a member of the Canadian G7 Gender Equality Advisory Council directs a well–constructed argument toward his fellow men (particularly straight, white, middle–class men): that actively working for gender equity at personal, organizational, and societal levels is not only critical for human rights as a whole, but directly beneficial to men and their children . . . Kaufman is admirably careful not to take over the work of women and other marginalized people, focusing on educating and motivating his peers. This is a cogent, unusual call to action.” —Publishers Weekly

“Kaufman argues persuasively that true gender equality will be good for the economy, families, the environment, and perhaps, especially, men themselves . . . Kaufman focuses on how the power granted by gender inequality puts men over women, some men over other men, and man over nature, thus widening his scope. A timely, informative, thought–provoking, and practical approach to a necessary social reform. Recommended for both men and women.” —Booklist

“A longtime gender equality activist and masculinity studies scholar argues that women are not the only victims of patriarchy . . . A rousing vision, though . . . Inclusive and timely arguments.” —Kirkus Reviews

“Through personal stories, insights gleaned from decades of working to end gender–based violence, and practical advice for those men ready to step up to the plate, Kaufman has produced a special book. It will be an important guide to the many men now seeking ways to stop violence against women, to create a more nurturing and loving culture for all.” —Judy Norsigian, cofounder of Our Bodies Ourselves

“The Time Has Come is a critically important for our time and required reading for us all. I had a hard time putting it down—it's a great book.” —Rosanna Arquette, Emmy–nominated actor