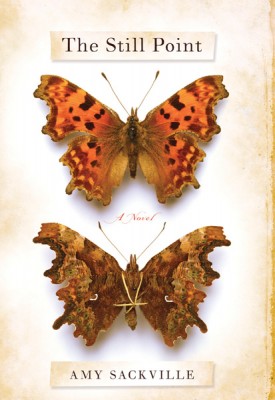 At the turn of the twentieth century, Arctic explorer Edward Mackley sets out to reach the North Pole and vanishes into the icy landscape without a trace. He leaves behind a young wife, Emily, who awaits his return for decades, her dreams and devotion gradually freezing into rigid widowhood.

A hundred years later, on a sweltering mid–summer’s day, Edward’s great–grand–niece Julia moves through the old family house, attempting to impose some order on the clutter of inherited belongings and memories from that ill–fated expedition, and taking care to ignore the deepening cracks within her own marriage. But as afternoon turns into evening, Julia makes a discovery that splinters her long–held image of Edward and Emily’s romance.

The Still Point moves through past, present, and future, with dreams revealing a universal simultaneity to the choices we must all make in the faces of love and passion. Long–listed for the Orange Prize, The Still Point is a powerful literary debut, masterfully told in the language of the heart.

Amy Sackville was born in 1981. She studied English and Theatre Studies at Leeds, and went on to an MPhil in English at Exeter College, Oxford, and an MA in Creative & Life Writing at Goldsmiths. Her first novel was The Still Point. She teaches creative writing at the University of Kent.

Praise
Praise for The Still Point

"Many novels explore the sliding planes, the archaeology of past, present and future and the still points where the fabric of time is rent and characters slip through. This is a lot to juggle, especially in a debut novel, but Amy Sackville pulls it off — thrillingly, seductively, dreamily. Not only do all the moving parts hold together, but a new fictional voice emerges here as well; not harsh, brash and shiny, not overly self–conscious and sentimental — somewhere between the calm beauty we expect from novels that invoke Victorian England and the raw edges of modern life." —Los Angeles Times

"A quiet but significant debut about identity and family." —Financial Times

"Amy Sackville's The Still Point, a story of turn–of–the–century arctic pioneering and contemporary emotional frozen states, has an Eliotic calm that seems almost uncanny in a debut writer, and a narrative voice that's subtle and original." —Times Literary Supplement

"Through Sackville's rhythmic, lyrical prose, readers discover an Arctic alive with form and color, a place of unusual beauty with the ability to destroy. This is a subtle, probing exploration of the role of faith, the meaning of failure, and history's power to move us forward." —Booklist

Praise for the U.K. edition

"The two worlds of ice and heat, a century apart, are carefully balanced by exquisitely restrained prose." —Guardian

"As iridescent in its writing as the snowy wastelands it evokes . . . This is a novel of palpable promise." —Times Literary Supplement

"Sackville creates some soaring prose, full of elegance and confidence." —The List

"If Virginia Woolf had had a younger sister with a passionate interest in icebergs, she might have written something like this beautiful, unearthly novel, in which the secrets of a house and of a marriage continually open out onto a wild glare of Arctic light." —Francis Spufford, author of The Child That Books Built

"Sackville writes with great assurance and wonderfully evokes the polar landscape and the atmosphere of the period. A most promising debut." —Penelope Lively

"Remarkable both as stylist and storyteller, Sackville unfolds a love story of compelling contrasts . . . a fine and distinctive first novel." —Maura Dooley