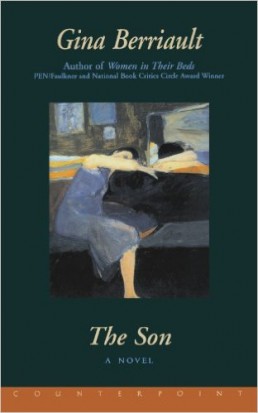 Vivian Carpentier, confined by her role as an upper class woman in the 1940s, gleans meaning only from erotic love. Troubled by the elusiveness of men, yet convinced that they run the world, she can barely conceal her desperation to entice. Struggling with motherhood and the failure of marriage, she takes jobs to bridge intervals between lovers. She sings in a hotel bar, sells dresses, and nurses her father’s friend through his last illness, hoping to atone for a self-centered life. The constant in Vivian’s life is her son, David. Having seen her worst and best moments, he provides her with consolation and a reason for living, “In those days of her lover’s absence, she grew fascinated with her son’s beauty …. with the hard blue of his eyes, with all the particulars of his face, the pliability of his lips.” The Son is the haunting story of a woman who desires “something more, as if something more had been promised her that was not yet given.”