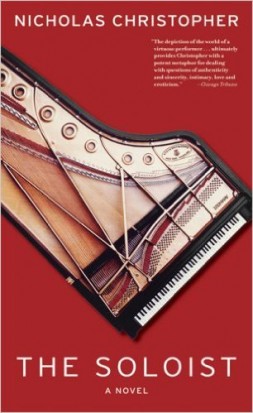 At thirty–four, piano soloist Max Randal has hit a wall. It’s been four years since his last live performance, and his manager is intent on revitalizing his career with a big concert at Carnegie Hall. As if that wouldn’t be enough for Max to worry about, as he struggles to prepare, the ghosts of his failed relationships have come to haunt him — his first ex–wife is dying, his second ex–wife wants to get back together, the mother of his child has taken off for Europe and unexpectedly left him to care for their nine–year–old, and his present girlfriend now wants to get serious. Believe it or not, the plot only gets thicker.

Merging dozens of characters and events into a seamless narrative, gifted novelist and poet Nicholas Christopher delivers a compelling tale. Like an exhilarating performance, The Soloist takes you on a brilliant adventure that resonates even once it’s over.

Nicholas Christopher is the author of seventeen books: eight previous volumes of poetry, most recently, Crossing the Equator: New & Selected Poems; six novels, including The Soloist, Veronica, and A Trip to the Stars; a nonfiction book, Somewhere in the Night: Film Noir & the American City; and a novel for children, The True Adventures of Nicolò Zen. He lives in New York City.