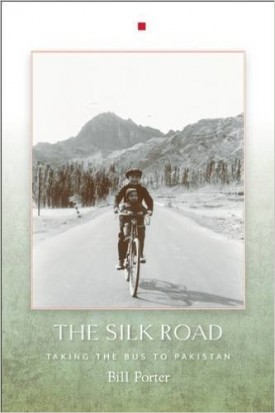 Taking the Bus to Pakistan

To travel upon the Silk Road is to travel through history. Millennia older than California’s Camino Real, and perhaps even a few years senior to the roads of the Roman Empire, the Silk Road is a network of routes stretching from delta towns of China all the way to the Mediterranean Sea – a cultural highway considered to be essential to the development of some of the world’s oldest civilizations. It was upon this road that that Chinese silk traveled and was exchanged for incense, precious stones, and gold from India, the Middle East and as far the Mediterranean, contributing to the great tradition of commercial and idea exchange along the way.

In the fall of 1992, celebrated translator, writer, and scholar Bill Porter left his home in Hong Kong and decided to travel from China to Pakistan by way of this famous and often treacherous Silk Road. Equipped with a plastic bottle of whiskey, needle–nose pliers, and the companionship of an old friend, Porter embarks upon the journey on the anniversary of Hong Kong’s liberation from the Japanese after World War II and concludes in Islamabad, the capital of Pakistan, at the end of the monsoon season. Weaving witty travel anecdotes with the history and fantastical mythology of China and the surrounding regions, Porter exposes a world of card–sharks, unheard–of ethnic minorities, terracotta soldiers, nuclear experiments in the desert, emperors falling in love with bathing maidens, monks with miracle tongues, and a giant Buddha relaxing to music played by an invisible band.

The Silk Road is the second of a three–book memoir series about Porter’s travels in and around China to be published by Counterpoint. With an eye for cultural idiosyncrasies and a vast knowledge of history, Porter continues to make with his mark as an expert and travel writer.

Writing as Red Pine, he was the first translator to ever translate the entirety of Han-shan's oeurve into English, published as The Collected Songs of Cold Mountain. Red Pine was also the first to translate into English the entirely of The Poems of the Masters. He has also translated several of the major Buddhist sutras, including the Heart Sutra, Diamond Sutra, and Platform Sutra.
Praise
Winner of the 2018 Thornton Wilder Prize for Translation