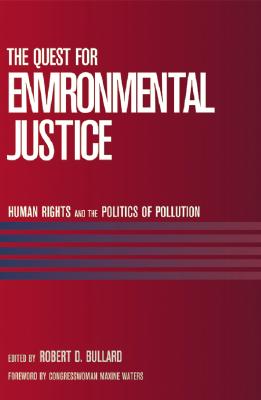 The Quest for Environmental Justice

Human Rights and the Politics of Pollution

This much anticipated follow–up to Dr. Robert D. Bullard’s highly acclaimed Unequal Protection: Environmental Justice and Communities of Color captures the voices of frontline warriors who are battling environmental injustice and human rights abuses at the grassroots level around the world, and challenging government and industry. policies and globalization trends that place people of color and the poor at special risk.

Together, the diverse contributors to this much–anticipated follow–up anthology present an inspiring and illuminating picture of the environmental justice movement in the first decade of the twenty–first century.

Robert D. Bullard is often described as the father of environmental justice. He is the former Dean of the Barbara Jordan-Mickey Leland School of Public Affairs at Texas Southern University 2011-2016. Professor Bullard currently is Distinguished Professor of Urban Planning and Environmental Policy.

Praise
"A refreshing and timely overview of contemporary environmental justice struggles and the fight against environmental racism around the nation and indeed the world."--Congresswoman Maxine Waters

"Robert Bullard and his colleagues have made a crucial link between the global movement for environmental justice and the international human rights movement. It is difficult to overstate the importance of this work for the millions of people across the planet who are struggling against both environmental injustices and human rights abuses. The contributors to this volume present a powerful framework for moving forward to a state of the world that is socially just and ecologically sustainable."--David Naguib Pellow, author of Garbage Wars: The Struggle for Environmental Justice in Chicago

"Robert Bullard, whose scholarship created a whole field of study, continues to expand on our understanding of the environmental justice movement. In The Quest for Environmental Justice, Dr. Bullard has assembled a group of experts dedicated to eradicating the injustices suffered by people of color, indigenous peoples, and the poor. This volume presents more than 'the empirical evidence'; its focus is on the day-to-day struggles of those engaged in the environmental justice movement. It demonstrates our hopes and victories, our frustrations and defeats, our commitment to basic human rights and social justice."--David E. Camacho, Ph.D., Professor of Political Science and editor of Environmental Injustices, Political Struggles: Race, Class, and the Environment

"Bob Bullard has done it again: this latest compilation is a fresh, critical approach to the environmental justice field, reflecting the maturation of the movement and its scholars. It breaks new ground by seamlessly weaving in international environmental justice perspectives, with discussions of Columbia, the Philippines, and Nigeria as well as dozens of communities across the United States. Beyond being a compelling read--which it is--it is also a crucial reference work that collects key environmental justice data that will be useful for years to come. If you read one book on environmental justice this year, this is the one to read."--Luke Cole, Director, Center on Race, Poverty & the Environment