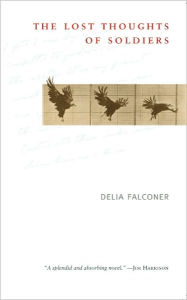 The Lost Thoughts of Soldiers

Georgia, 1898: On what may be the last day of his life, Captain Frederick Benteen — the man who saved Custer’s Seventh Cavalry from almost certain death at Little Bighorn — receives a letter from an ambitious boy offering to “restore” his reputation. For over 23 years Benteen has silently watched Custer’s legend grow. His General has been dead for more than 20 years, killed in action, considered a hero, while the public has never forgiven Benteen for surviving. Now, at last, he begins to put down some account of those two horrific days pinned down on a ridge. What follows is an exquisite eulogy for his fellow soldiers, both alive and dead. Funny, moving, rich in character and incident, this acclaimed novel avoids the bloody battle scenes and maudlin romance that characterize much Civil War-based fiction in favor of an unsparing and poetic story that explores what it means to be a soldier — then and now.

Delia Falconer is the author of three books: two novels and one work of creative nonfiction. Her first novel, the bestselling The Service of Clouds, was shortlisted for major literary awards including the Miles Franklin, NSW Premier's Literary Awards, Victorian Premier's Literary Awards, and the Australian Booksellers' Book of the Year. Her second, The Lost Thoughts of Soldiers, was shortlisted among other awards for the Commonwealth Writers' Prize (Asia Pacific Division). Her most recent book is Sydney, a personal history of her hometown, which was shortlisted for seven national awards in history, biography and nonfiction, and won the 2011 "Nib" CAL/Waverley Library Award for outstanding research.

Praise
"This beautifully complex novel, with its echoing lacunae, its delicate touches alongside brutishness, reads like a timeless work of human history. Ms. Falconer's gift for phrasing and putting the right words to fleeting emotions makes the intimacy of her drama all the more compelling." —Barry Lopez

"The Lost Thoughts of Soldiers is evocative and melancholy, a poetic impression of Captain Benteen toward the end of his life . . . The book is original and vivid." —Evan S. Connell