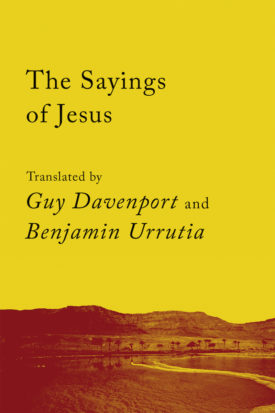 The Sayings of Jesus

The Logia of Yeshua

Jesus was a street preacher who taught through story and aphorism. Antedating the Gospels, these 105 sayings were recorded by his followers during and shortly after his lifetime. Through the immediacy of direct quotation, Guy Davenport and Benjamin Urrutia’s bold translation shakes our preconceptions, reintroducing us to the West’s greatest teacher, whose powerful words ring anew.

BENJAMIN URRUTIA is a teacher, linguist, and scholar who has published numerous articles about biblical subjects. Born in Guayaquil, Ecuador, he served for a time in the Israeli army and now resides in Chicago.

Praise
Praise for The Sayings of Jesus

“Davenport and Urrutia have approached the sayings of Jesus—the logia of Yeshua—with the eyes and ears of poets and linguists who seek to encounter the itinerant street preacher and poet who lies behind the mythic figure . . . Nearly akin to a volume of poetry reconstructed from fragments, and readers should expect to encounter the translators as collaborators of the poet . . . They are sensitive collaborators, and the encounter will prove revealing, especially for readers who believe they know Yeshua well.” —Booklist