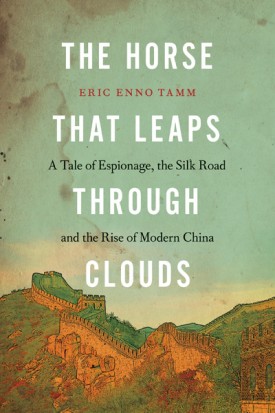 The Horse That Leaps Through Clouds

A Tale of Espionage, the Silk Road, and the Rise of Modern China

On July 6, 1906, Baron Gustaf Mannerheim boarded the midnight train from St. Petersburg, charged by Czar Nicholas II to secretly collect intelligence on the Qing Dynasty’s sweeping reforms that were radically transforming China. The last czarist agent in the so–called Great Game, Mannerheim chronicled almost every facet of China’s modernization, from education reform and foreign investment to Tibet’s struggle for independence.

On July 6, 2006, writer Eric Enno Tamm boards that same train, intent on following in Mannerheim’s footsteps. Initially banned from China, Tamm devises a cover and retraces Mannerheim’s route across the Silk Road, discovering both eerie similarities and seismic differences between the Middle Kingdoms of today and a century ago.

Along the way, Tamm offers piercing insights into China’s past that raise troubling questions about its future. Can the Communist Party truly open China to the outside world yet keep Western ideas such as democracy and freedom at bay, just as Qing officials mistakenly believed? What can reform during the late Qing Dynasty teach us about the spectacular transformation of China today? As Confucius once wrote, “Study the past if you would divine the future,” and that is just what Tamm does in The Horse that Leaps Through Clouds.

Eric Enno Tamm is an author and journalist. His first book, Beyond the Outer Shores: The Untold Story of Ed Ricketts, the Pioneering Ecologist Who Inspired John Steinbeck and Joseph Campbell, was a Kiriyama Prize Notable Book. His writing has appeared in the Globe & Mail, Los Angeles Times Magazine, San Francisco Chronicle, and the Toronto Star, among others. Tamm currently lives and works in Ottawa.

Praise
Praise for The Horse That Leaps Through Clouds

"Following in the footsteps of Baron Carl Gustav Mannerheim, the last Tsarist spy in the so–called Great Game, Tamm has written a grand sweep of a narrative. It combines a long and arduous physical journey—9 months and 17,000 kilometers from St. Petersburg across the Tibetan Plateau and the Gobi desert to Beijing—with the revelations of high stakes history—espionage in virtually unknown territory in the early years of the twentieth century. At its core, this is a journey into the soul of the Middle Kingdom, and the roots of modern China. Full of wild characters, harsh geography, and historical surprise, Tamm's journey reveals him to be at once an intrepid adventurer, fine writer, and discerning historian. Altogether a wonderful book." —Wade Davis

Praise for Beyond the Outer Shores