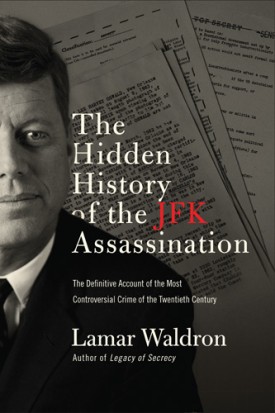 The Hidden History of the JFK Assassination

November 22, 2013 marks the 50th anniversary of the tragedy that has haunted America ever since. For the first time, this concise and compelling book pierces the veil of secrecy to fully document the small, tightly–held conspiracy that killed President John F. Kennedy. It explains why he was murdered, and how it was done in a way that forced many records to remain secret for almost fifty years.

The Hidden History of JFK’s Assassination draws on exclusive interviews with more than two dozen associates of John and Robert Kennedy, in addition to former FBI, Secret Service, military intelligence, and Congressional personnel, who provided critical first–hand information. The book also uses government files—including the detailed FBI confession of notorious Mafia godfather Carlos Marcello—to simply and clearly reveal exactly who killed JFK. Using information never published before, the book uses Marcello’s own words to his closest associates to describe the plot. His confession is also backed up by a wealth of independent documentation.

This book builds on the work of the last Congressional committee to investigate JFK’s murder, which concluded that JFK ‘was probably assassinated as a result of a conspiracy,” and that godfathers [“Santo] Trafficante [and Carlos] Marcello had the motive, means, and opportunity to assassinate President Kennedy.” However, it also draws on exclusive files and information not available to Congress, that have only emerged in recent years, to fully explain for the first time how Marcello and Trafficante committed—and got away with—the crime of the 20th century.

Some of the book’s revelations will be dramatized in the upcoming Warner Brothers film Legacy of Secrecy, produced by and starring Leonardo DiCaprio, which also stars Robert De Niro as Carlos Marcello.

The Hidden History of JFK’s Assassination is the definitive account of the crime and the secrecy which has surrounded it.

Waldron's work was praised by Ronald Goldfarb, a top Mafia prosecutor for Robert Kennedy in 1963, marking the first time in over twenty years a book about JFK's assassination has been recommended by someone who worked closely with John or Robert Kennedy. Waldron's research has also been endorsed by veteran FBI agent William Turner and noted Kennedy biographer John H. Davis. Waldron's discoveries have also been featured on the History Channel and in Vanity Fair. He received undergraduate and graduate degrees from Georgia State University, and worked in the criminal justice field for seven years before beginning his writing career. THOM HARTMANN (co-author) Thom Hartmann is a best-selling author and national radio host for Air America. Heard by millions of radio listeners daily, Hartmann is the author of 17 books, including The Last Hours of Ancient Sunlight, which helped to inspire Leonardo DiCaprio's recent documentary The 11th Hour, which features Hartmann. His other books include: We the People; Unequal Protection; What Would Jefferson Do, and Screwed: The Undeclared War Against the Middle Class-And What We Can Do About It. Hartmann was prominently featured in countless media outlets, including NPR and BBC radio, CNN television, the front page of The Wall Street Journal, and Time Magazine.