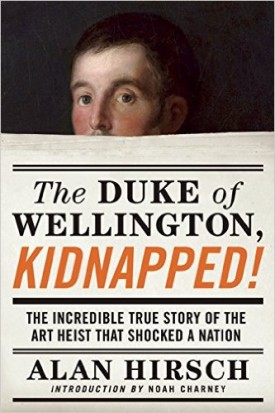 The Duke of Wellington, Kidnapped!

In 1961, a thief broke into the National Gallery in London and committed the most sensational art heist in British history. He stole the museum’s much prized painting, The Duke of Wellington by Francisco Goya. Despite unprecedented international attention and an unflagging investigation, the case was not solved for four years, and even then, only because the culprit came forward voluntarily.

Kempton Bunton, an elderly gentleman, claimed he executed the theft armed with only a toy gun, a disguise purchased for five shillings, and a getaway car inadvertently provided by a drunkard. Shortly after turning himself in, Bunton also invoked language in an obscure law to maintain his innocence, despite the confession. He did not allege that the confession was false, but rather that stealing the painting did not constitute a crime because he intended to return it. On account of this improbable defense strategy, the story took another twist, resulting in a bizarre courtroom drama and extraordinary verdict.

Over fifty years later, Alan Hirsch decided to explore the facts behind this historic case and uncovered shocking new evidence that both solved the crime and deepened the mystery.

Alan Hirsch, a writer and Chair of the Justice and Law Studies Program at Williams College, received a J.D. from Yale Law School and an M.A. from Williams College in the History of Art. He moonlights as a trial consultant and expert witness on police interrogations and false confessions across the nation. In addition to numerous works of legal scholarship, Alan has written Talking Heads: Political Talk Shows and Their Star Pundits (St. Martin's, 1991) and is the co-author with Akhil Amar of For the People: What the Constitution Really Says About Your Rights (Free Press, 1998) and. His writing has appeared in the Washington Post, Los Angeles Times, Washington Times, Newsday, and the Village Voice. He lives in Williamstown, Massachusetts.

Praise
"If you’ve never heard of the theft of Francisco de Goya's Portrait of the Duke of Wellington from London’s National Gallery, trust that it’s a tale worth telling . . . Alan Hirsch has delved into the incredible ins and outs of the crime, the bizarre motive for the painting’s ransom, the sensational trial, and, more than half a century later, the true story of who was responsible—never mind the history books." —artnet News

"… [An] entertaining narrative… this gripping story of a hapless art thief, a prized work of art, and the workings of the British justice system makes for an intriguing addition to the annals of modern art history."—Booklist

"This colorful true–crime story makes a zany whodunit out of an art heist that stunned England's National Gallery in London more than 50 years ago… Hirsch writes his debut book's opening chapters like a finely tuned suspense thriller, alternating chapters of biography about the irascible and very unreliable Bunton and the authorities' investigation of the crime and its clues. His description of Bunton's amusing trial is the stuff of an Ealing Studios comic crime caper. The book's surprise ending perfectly caps this story of the unlikely art thief who made sport of his nation's criminal justice system.""—Publishers Weekly

"This story has all the potential of a great mystery and a thrilling crime story.""—Kirkus

"As fun as it is improbable, The Duke of Wellington, Kidnapped! tells the story of a real–life heist too strange to be made up. Hirsch manages to solve one of the great art thefts of the twentieth century and, at the same time, to deepen its mystery."—Elizabeth Kolbert, Pulitzer Prize winning author of The Sixth Extinction

"In this page–turner, Alan Hirsch carefully unravels the tangled case of a major art heist whose true story eluded investigators for a half century. With a writer's flair and a lawyer's precision, he portrays the hall of mirrors that can disorient a criminal justice system, and he raises questions about the nature of justice itself." —David K. Shipler, Pulitzer Prize–Winning author of Arab and Jew: Wounded Spirits in a Promised Land