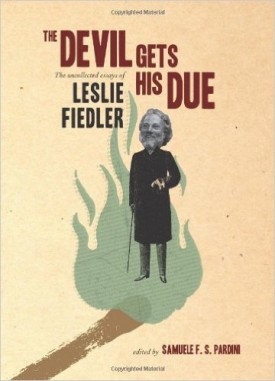 The Devil Gets His Due

The Uncollected Essays of Leslie Fiedler

Despite his often-unacknowledged influence, academics, intellectuals, and the general audience in America and abroad still read Leslie Fiedler’s work and draw on its concepts. He inspired both reverence (Leonard Cohen penned: “leaning over the American moonlight / like the shyest gargoyle / who will not become angry or old”) and rage (Saul Bellow called him “the worst fucking thing that ever happened to American literature”). The essays in The Devil Gets His Due will reacquaint readers with the depth and breadth of Fiedler’s achievements. Tackling subjects ranging wildly from Dante, Ezra Pound, and Mary McCarthy to Rambo, Iwo Jima, and Jerry Lewis, these writings showcase Fiedler’s pioneering of an egalitarian canon that encompassed both “high” and popular literature, cinema, and history. As such, they show a powerful mind critiquing whole aspects of a culture and uncovering lessons therein that remain timely today. A lengthy introduction by Professor Samuele F. S. Pardini offers both context and history, with an in-depth profile of Fiedler and his career as both a literary critic and a public intellectual.

Leslie Aaron Fiedler was an American literary critic, known for his interest in mythography and his championing of genre fiction. His work incorporates the application of psychological theories to American literature. Fiedler's most renowned work is Love and Death in the American Novel.

Samuele F. S. Pardini holds a Laurea degree in Letters and Philosophy from the Universita' degli Studi di Pisa, Italy, and an M.A. and a Ph.D in Comparative Literature from the State University of New York at Buffalo. Dr. Pardini's teaching and research interests are Transnational American studies, Italian American and African American literature, Italian Studies, popular culture, cinema and literary criticism and theory, with a special focus on modernity in the 20th century. He edited and penned the introduction to The Devil Gets His Due: The Uncollected Essays of Leslie Fiedler. He also edited and translated into Italian two collections of Fiedler's writings titled Vacanze Romane: Un critico americano a spasso nell'Italia letteraria and Arrivederci alle armi.