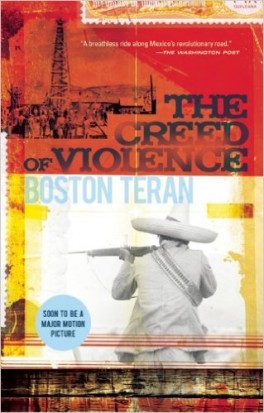 The Creed of Violence

Mexico, 1910. The landscape pulses with the force of the upcoming revolution, an atmosphere rich in opportunity for a criminal such as Rawbone. His fortune arrives across the haze of the Sierra Blanca in the form of a truck loaded with weapons.

But Rawbone’s plan spins against him, and he soon finds himself at the Mexican-American border and in the hands of the Bureau of Investigation. He is offered a chance for immunity, but only if he agrees to proceed with his scheme to deliver the truck and its goods to the Mexican oil fields while under the command of Agent John Lourdes. Rawbone sees no other option and agrees to the deal–but he fails to recognize the true identity of Agent Lourdes, a man from deep within his past. Set against a backdrop of intrigue and corruption, The Creed of Violence is a saga about the scars of abandonment, the greed of war, and America’s history of foreign intervention for the sake of oil.
About Boston Teran