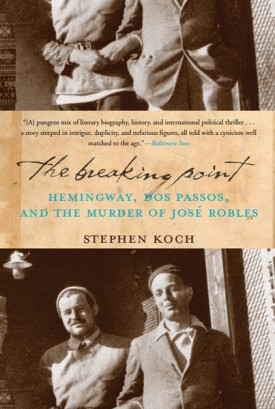 Hemingway, Dos Passos, and the Murder of Jose Robles

When American authors John Dos Passos and Ernest Hemingway went to Spain in 1937 to witness the Spanish Civil War firsthand, the devastation they encountered was far from impersonal: As Spain was unraveling thread by thread, so was the relationship between these two literary titans. They had arrived in Spain as comrades, leftist writers–in–arms. But a real–life literary mystery unfolded when Dos Passos’ friend José Robles—a Spanish–born Johns Hopkins professor—disappeared. Written from a novelist’s eye for detail, The Breaking Point is the story of two lives at the intersection of friendship and murder, of love and death, and of literature and history.

STEPHEN KOCH is the author of two novels and many books of nonfiction on subjects ranging from Andy Warhol to World War II. After serving as chairman of the Creative Writing Division in the School of the Arts at Columbia University, he wrote a classic text on writing, The Modern Library Writers' Workshop. The director of the Peter Hujar Archive, he lives with his wife in New York and has one daughter.