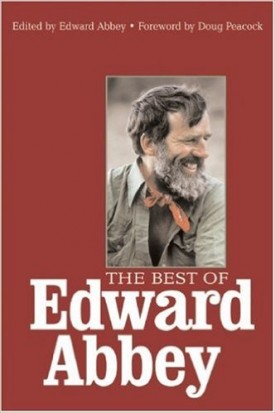 The Best of Edward Abbey

This is the only major collection of Abbey’s writings compiled by the author himself: in his own words, “to present what I think is both the best and most representative of my writing—so far.” It serves up a rich feast of fiction and prose by the singular American writer whom Larry McMurtry called “the Thoreau of the American West.”

Devoted Abbey fans along with readers just discovering his work will find a mother lode of treasures here: generous chunks of his best novels, including The Brave Cowboy, Black Sun, and his classic The Monkey Wrench Gang; and more than a score of his evocative, passionate, trenchant essays—a genre in which he produced acknowledged masterpieces such as Desert Solitaire. Scattered throughout are the author’s own petroglyph–style sketches.

This new edition adds selections from work that appeared shortly before Abbey’s death: a chapter from Hayduke Lives!, the hilarious sequel to The Monkey Wrench Gang; excerpts from his revealing journals; and examples of his poetry. A new foreword by Doug Peacock—Abbey’s close friend and the model for the flamboyant activist Hayduke—offers a fond appreciation of this larger–than–life figure in American letters.

Edward Abbey was born in the town of Indiana, Pennsylvania on January 29, 1927. He grew up around the nearby village of Home, which now has a state historical marker commemorating Abbey. After a brief military career 1945-1947 in Naples, Italy he attended Indiana University of Pennsylvania.

In 1944 at age 17 he left the family farm in Home and set off to see the American West. He hitchhiked and rode the rails--across the Midwest to the Rockies and the West Coast, returning by way of the Southwest. He fell in love with the desert, a love that shaped his life and art for more than 40 years. For 15 years and well into his forties, he worked as a part-time ranger and fire lookout at several different national parks, his two seasons as a ranger at Arches National Monument (later a national park) in Utah providing the inspiration and raw material for Desert Solitaire. In 1987, Edward Abbey was offered a major award by the American Academy of Arts and Letters. Abbey declined the honor. He died in 1989.
Praise
"Abbey can attain a kind of glory in his writing. He takes scenes that have been well-traveled by other writers and recreates them as traditional American myth."--"New York Times Book Review "Praise the earth for Edward Abbey."--"Los Angeles Times Book Review