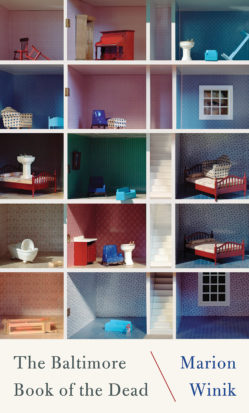 The Baltimore Book of the Dead

“This book is both brief and miraculous, and it will be finished before you’re ready to let it go. Like life.” –Ann Patchett, author of Commonwealth

When Cheryl Strayed was asked by The Boston Globe to name a book she finds herself recommending time and again, she chose The Glen Rock Book of the Dead. Now, a decade later, that beloved book has a moving companion volume. The Baltimore Book of the Dead is a new collection of portraits of the dead, weaving an unusual, richly populated memoir of compressed narratives. Approaching mourning and memory with intimacy, humor, and an eye for the idiosyncratic, the story starts in the 1960s in Marion Winik’s native New Jersey, winds through Austin, Texas, and rural Pennsylvania, and finally settles in her current home of Baltimore. Winik begins with a portrait of her mother, the Alpha, introducing locales and language around which other stories will orbit: the power of family, home, and love; the pain of loss and the tenderness of nostalgia; the backdrop of nature and public events. From there, she goes on to create a highly personal panorama of the last half century of American life.
About Marion Winik

MARION WINIK is the is the author of First Comes Love, The Baltimore Book of the Dead and eight other books. She writes the Bohemian Rhapsody column at BaltimoreFishbowl.com, and is the host of Baltimore WYPR's The Weekly Reader. She reviews books for Newsday, People, and Kirkus Reviews and teaches in the MFA program at the University of Baltimore.

Praise for The Glen Rock Book of the Dead

"I read this book in one sitting. It's so beautiful, sad, interesting, funny, and true that I simply could not put it down. This is one cool book. Each chapter is about a dead person the author knew. The chapters are short and intense and riveting and beautifully written. Winik has many gifts as a writer, but one I appreciate the most is her ability to write about the hardest, darkest subjects with a light, knowing hand. Situations are bleak, but life is not. Life is hard and hilarious and good and complex and often, entirely inexplicable. Winik shows us that in this book. I love The Glen Rock Book of the Dead. I think you will too." --Cheryl Strayed, author of Wild

"Few among us, when we die, will be lucky enough to be eulogized as intriguingly as the individuals in Marion Winik's The Glen Rock Book of the Dead. The slender and elegantly illustrated volume chronicles the stories of some 50 individuals the author once knew, compressing their lives and personal significance into brief, two-page essays. The eighth book from this critically acclaimed writer and poet is a sort of modern-day version of Edgar Lee Masters' Spoon River Anthology - the almost century-old classic that told the tale of a town in the voices of its deceased." --Susan Carpenter, The Los Angeles Times

"Much of literature is elegiac in nature. Much of Winik's propulsive, come-clean writing has been about coping with loss. So it makes sense that her newest essay collection comprises tributes to her dead. Glen Rock is the quiet place she lives; Spoon River Anthology was her template. Bold and funny, Winik is the queen of pithiness and punch, and the micro-lives she has created here are far more difficult to forge than their brevity and blithe tone might suggest. Each family member, friend, lover, or neighbor is identified by occupation, temperament, obsession, or curse, such as The Art Star, The Junkie, The Mah Jongg Player, The Bad Influence. And each portrait is a window onto some aspect of Winik's life, one that has been pitted and torn by deaths accidental, suicidal, and simply tragic, including many due to AIDS. It is a fine and noble act to remember the dead as Winik has with candor, bemusement, and sorrow, and her gracefully crafted miniatures will inspire others to summon memories of their own lost ones." --Donna Seaman, Booklist

"... Although she's known many people who died young, in sad or unsavory ways, the book is uplifting, funny and deep. This is partly because Winik resists the temptation to be overly reverent or poetic, though there are plenty of graceful passages. Her fascinating, tiny tributes tell the bare-assed truth about relationships while coming together to create a portrait of Winik's own imperfect, love-filled life." --Marcia Menter, More; Ten Best Books of 2008

"Spoon River Anthology as told by a female Jack Kerouac." -This Week's Book

"I only hope that Winik will continue to write, and share her insightful stories with the world. If that requires her to use a sixth sense, talk to dead people, reminisce old times, I won't be one to judge." --Jess Krout, Hanover Evening Sun

"The truth, so tragic and so exhilarating, is the gift Marion Winik offers up with honesty and compassion in this incomparable book." --Harvey Freedenberg, Harrisburg Patriot-News's Sunday magazine

"If you have read First Comes Love--Winik's memoir about her marriage to a gay man and his death from AIDS--you may imagine what you are in for: equal parts laceration and exhilaration, 100% brilliance. To say there has never been a book like this doesn't begin to get at my admiration for what Winik does here--I'm dazzled by the highwire act of her writing, her willingness to go deep and then go deeper, and her immense wisdom about life . . . If you have the guts to read this book--easily the most powerful document I've read in years--you will almost surely make your own list of the lost. You can't not. The Glen Rock Book of the Dead is that haunting, that beautiful, that necessary." --Jesse Kornbluth, HeadButler.com

"Alongside the numerous deaths from AIDS and the poignant lament that there are no gay couples of Winik's generation, there is a house ravaged by Katrina, a soldier lost in Iraq, the World Trade Center, Winik imbuing each departed with a dignity and grace everyone deserves in death but might not have had in life . . . Death comes, they say, like a thief in the night. It comes for all of us; if we're lucky, there is a Marion Winik in our lives to document who we were and what we meant as we cool our heels in the VIP lounge of the afterlife. We all deserve it, and, as evidenced by this book, no one knows that more keenly than Marion Winik." --Melanie Haupt, Austin Chronicle