Longtime All Things Considered commentator MARION WINIK is the author of First Comes Love, The Glen Rock Book of the Dead, and seven other books. Her Bohemian Rhapsody column at BaltimoreFishbowl.com has received the Best Column and Best Humorist awards from Baltimore Magazine, and her essays have been published in The New York Times Magazine, The Sun, and many other publications. She is the host of The Weekly Reader radio show and podcast, based at the Baltimore NPR affiliate. She reviews books for Newsday, People, and Kirkus Reviews and is a board member of the National Book Critics Circle. She is a professor in the MFA program at the University of Baltimore. 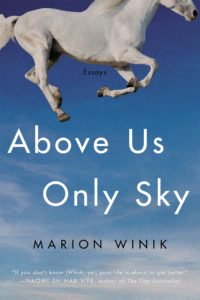 Above Us Only Sky

"These essays on a woman's wild ride through life give us Marion's bracing tonic–of–truth voice in splendid form—her voice that is always brilliantly funny, intelligent, brave, haunting, and full of surprises, revelations, and wise, wild connections. At this point, I don't think I could live without it. If you don't know her yet, your life is about to get better." —Naomi Shihab Nye

Whether she is writing about the vagaries of family vacations on land and sea, about getting her tubes tied and the importance of a woman's right to choose, or her battles with her rebel pyromaniac teenage son, Marion Winik is searingly honest and unfailingly witty in the face of adversity. In this collection of essays, a treat for dedicated fans and new readers alike, Winik explores domesticity, midlife, and aging.

A brand new final section brings Above Us Only Sky—originally published in 2005—up to date with essays from her award–winning column in the Baltimore Fishbowl, taking us through experiences with blended families, adult children, and empty nest. 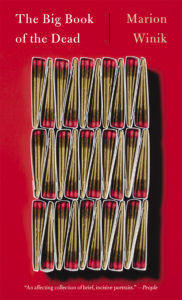 The Big Book of the Dead

Marion Wink is esteemed for bringing humor and wit to that most unavoidable of subjects: death.

At last, Winik's critically acclaimed, cult favorites, Glen Rock Book of the Dead and Baltimore Book of the Dead, have been carefully combined in their proper chronological order, revealing more clearly than ever before the character hidden throughout these stories: Winik herself.

Featuring twelve additional vignettes along with a brand–new introduction, The Big Book of the Dead continues Winik's work as an empathetic, witty chronicler of life. 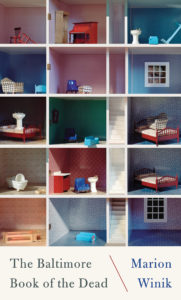 The Baltimore Book of the Dead

“This book is both brief and miraculous, and it will be finished before you’re ready to let it go. Like life.” —Ann Patchett, author of Commonwealth

When Cheryl Strayed was asked by The Boston Globe to name a book she finds herself recommending time and again, she chose The Glen Rock Book of the Dead. Now, a decade later, that beloved book has a moving companion volume. The Baltimore Book of the Dead is a new collection of portraits of the dead, weaving an unusual, richly populated memoir of compressed narratives.

Approaching mourning and memory with intimacy, humor, and an eye for the idiosyncratic, the story starts in the 1960s in Marion Winik’s native New Jersey, winds through Austin, Texas, and rural Pennsylvania, and finally settles in her current home of Baltimore.

Winik begins with a portrait of her mother, the Alpha, introducing locales and language around which other stories will orbit: the power of family, home, and love; the pain of loss and the tenderness of nostalgia; the backdrop of nature and public events. From there, she goes on to create a highly personal panorama of the last half century of American life. 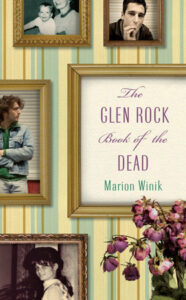 The Glen Rock Book of the Dead

In her author's note, Marion Winik writes that in Mexico on the Day of the Dead, "people build altars to their loved ones . . . they go to the cemetery and stay all night, praying, singing, drinking, wailing. They tell the sad stories and the noble ones; they eat cookies shaped like skeletons. They celebrate and mourn at once." Striking that balance, The Glen Rock Book of the Dead presents snapshot portraits of The Jeweler, The Driving Instructor, The Bad Influence, The Queen of New Jersey—and roughly fifty others who have touched Winik's life, from her son's second grade teacher to Keith Haring. Tied together by the inimitable, poignant voice of Winik, these losses form not only an autobiography but a story of our time, delivering a lyrical journey that ultimately raises the spirits.