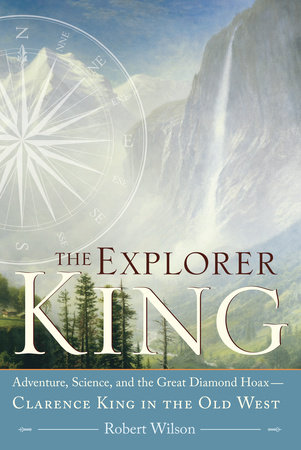 Adventure, Science, and the Great Diamond Hoax Clarence King in the Old West

In the 1800s, the young Clarence King was an icon of the new America: a man of adventure and intellect, a flash–in–the–pan celebrity who combined science and exploration with romanticism and charm. Robert Wilson’s biography, The Explorer King, vividly depicts King’s daredevil feats including his journey to the highest peak of the Sierra Nevada, and uncovers the reasons for the shocking decline he suffered after his days on the American frontier.

Through King’s own rollicking tales, some true, some embroidered, of scaling previously unclimbed mountain peaks, of surviving a monster blizzard near Yosemite, of escaping ambush and capture by Indians, of being chased on horseback for two days by angry bandits, Robert Wilson offers a powerful combination of adventure, history, and nature writing, he also provides the bigger picture of the West at this time. Ultimately, King himself would come to symbolize the collision of science and business, one of the sources of his downfall. Fascinating and extensive, The Explorer King movingly portrays the America of the nineteenth century and the man who—for better or worse—typified the soul of the era.

Robert Wilson is the editor of the Scholar and the author of Barnum: An American Life, among other works.