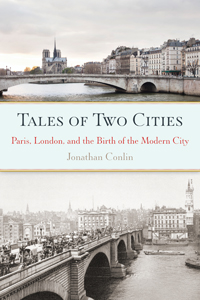 Paris, London and the Birth of the Modern City

Paris and London have long held a mutual fascination, and never more so than in the period 1750–1914, when they vied to be the world’s greatest city. Each city has been the focus of many books, yet Jonathan Conlin here explores the complex relationship between them for the first time. The reach and influence of both cities was such that the story of their rivalry has global implications. By borrowing, imitating and learning from each other Paris and London invented the true metropolis.

Tales of Two Cities examines and compares five urban spaces—the pleasure garden, the cemetery, the apartment, the restaurant and the music hall—that defined urban modernity in the nineteenth century. The citizens of Paris and London first created these essential features of the modern cityscape and so defined urban living for all of us.

Jonathan Conlin was born in New York and later moved to Britain, where he studied history at Oxford. He went on to do graduate work at the Courtauld Institute and Cambridge, completing his PhD thesis on the early history of the National Gallery, London; his books include The Nation's Mantelpiece and Civilisation.

"What Conlin achieves with this history of influences is an entertaining account that strings together fascinating factoids into a tapestry of urban history and cultural anthropology. . .[He] weaves together a web of interactions and accounts from both fiction and nonfiction sources. He does this with the straightforward prose of a journalist and the intellectual imagination of a historian."—New York Journal of Books

"In exploring this subject in depth, Conlin has made a most useful addition to the history of cities and the people who inhabit them."—The Washington Post