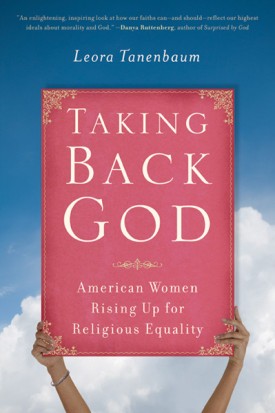 If you’ve witnessed the preferential treatment of men in America’s houses of worship, you will not be surprised to learn that there is a surge of women in this country rising up and demanding religious equality. More and more, religious women—Christian, Muslim, and Jewish—are declaring that they expect to be treated as equals in the religious sphere. They want the same meaningful spiritual connections enjoyed by their brothers, fathers, husbands, and sons. They embrace the word of God but are critical of their faith’s male–oriented theology and liturgy. They reject the conventional interpretations of religious traditions that give women a different—and, to their minds, lesser—status. Rather than abandoning their faith, these women are taking it back and making it stronger, transforming religion while maintaining tradition.

Leora Tanenbaum relates the experiences of Catholics, evangelical and mainline Protestants, Muslims, and observant Jews. The conflict these religious women face—honoring tradition while expanding it to synchronize with modern values—is ultimately one that all people of faith grapple with today.

Leora Tanenbaum is the author of Slut! Growing Up Female with a Bad Reputation and Catfight: Rivalries Among Women--from Diets to Dating, from the Boardroom to the Delivery Room. She lives in New York City with her husband and two sons.

Praise
Praise for Taking Back God

"Well–documented, engaging, and encouraging . . . This book stands out from others." —Library Journal

"Taking Back God may help forge alliances among women of different religions . . . And on a human level, it's a thoughtful exploration of a group of women who, like all women, live daily with contradictions." —Bitch

"Tanenbaum illuminates a forgotten landscape of progressive activism: religion. Her intimate perspective is personally revealing and enormously informative. She takes two of the most polarizing issues, religion and feminism, and weaves individual stories together to craft a tale of people not politics. She reminds us why we wanted to believe in the first place, and that religion is cause that is far from lost." —Feminist Review

"The author and her subjects seem to connect. Tanenbaum's chapters on Jewish women are incisive." —The Jewish Week

"Tanenbaum skillfully weaves interviews with 95 American women of all faiths into her own extensive research on the history of each religion. Compelling individual stories." —Book Corner

"Whether we eat matzah or ham at the dinner table this holiday season, our liturgy will feature men and more men. We worship a God invariably described as male, and we recite prayers that skip over our foremothers while praising to the high heavens our forefathers . . . Millions of devout women are fed up. They love their religion but want to take back their God." —Laura Tanenbaum on NPR

"Rich in anecdote, careful in analyses, strong in message, this highly readable and sophisticated text not only will inform the public at large but also chart the way forward for so many women who have chosen to take this journey." —Blu Greenberg, author of On Women and Judaism

"In Taking Back God, Tanenbaum has done a great service by presenting a riveting account of the sexist sins of our fathers in not one but three major religions, and by giving the faith–filled women fighting to elevate women's place in these religions the respect and attention they deserve. To every woman of faith who has ever sat in her church, mosque or temple feeling belittled, hurt, angry and alone, this one's for you." —Angela Bonavoglia, author of Good Catholic Girls: How Women are Leading the Fight to Change the Church

"Taking Back God is an enlightening, inspiring look at how our faiths can—and should—reflect our highest ideals about morality and God. It's a must–read for anyone who cares about religion in America today." —Danya Ruttenberg, author of Surprised by God and editor of Yentl's Revenge: The Next Wave of Jewish Feminism

"Religious feminism is not dead! If you believe in gender equality and belong to any of the three great 'religions of the Book,' Taking Back God will both energize and anger you. An observant Jew herself, Leora Tanenbaum carefully nuances the secondary status of many women in Judaism, Christianity, and Islam. She shows how women are challenging repressive traditions in light of the core values of their faith. As a Christian feminist myself, I especially appreciated learning about Jewish and Muslim women in parallel circumstances and with similar interpretive hurdles. Tanenbaum blends extensive research with human interest stories and an embracing attitude that keeps one turning the pages." —Reta Halteman Finger, Assistant Professor of New Testament, Messiah College, Grantham, Pennsylvania; and former editor of the Christian feminist magazine Daughters of Sarah

"It is a joy to find a book on women and religion that speaks from the point of view of religious women—women who love not just spirituality but organized religion, who care about tradition and ritual, and who hear the voice of egalitarianism as divine. At last, a treatment of Islamic gender debates that does not isolate Islam from other religions, or assume that Muslims are inherently more sexist than others. This book is a sincere attempt to understand, in a broad, generous, interfaith perspective, the concerns of religious women for equality and justice." —Mohja Kahf, Associate Professor, Middle East and Islamic Studies Program, University of Arkansas, and author of The Girl in the Tangerine Scarf

"Leora Tanenbaum is so uncannily accurate in capturing not only the facts but the nuanced heartbeat of a world that I know well—I read the book in one sitting. This is the most comprehensive overview of the status of women and religion I've read. It chronicles the harm religion can do to both men and women, but also holds out a promise of radiant hope." —Frank Schaeffer, author of Crazy for God