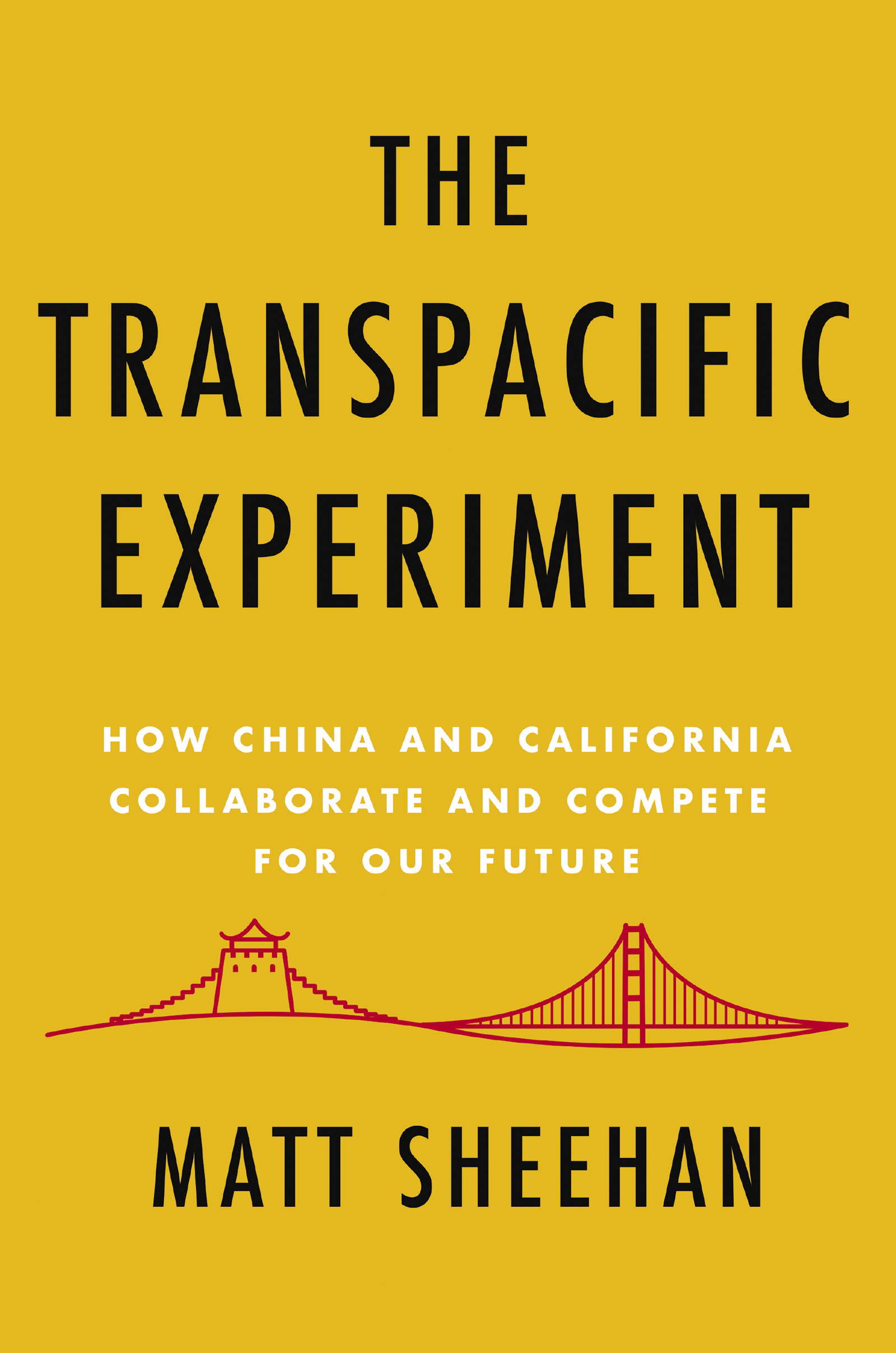 How China and California Collaborate and Compete for Our Future

A timely, vital account of California’s unique relationship with China, told through the exploits of the entrepreneurs, activists, and politicians driving transformations with international implications.

Tensions between the world’s superpowers are mounting in Washington, D.C., and Beijing. Yet, the People’s Republic of China and the state of California have built deep and interdependent socioeconomic exchanges that reverberate across the globe, making California and China a microcosm of the most important international relationship of the twenty–first century.

In The Transpacific Experiment, journalist and China analyst Matt Sheehan chronicles the real people who are making these connections. Sheehan tells the story of a Southern Californian mayor who believes a Chinese electric bus factory will save his town from meth labs and skinheads. He follows a Chinese AI researcher who leaves Google to compete with his former employer from behind the Great Firewall. Sheehan joins a tour bus of wealthy Chinese families shopping for homes in the Bay Area, revealing disgruntled neighbors and raising important questions about California’s own narratives around immigration and the American Dream.

Sheehan’s on–the–ground reporting reveals movie sets in the “Hollywood of China,” Chinese–funded housing projects in San Francisco, Chinese immigrants who support Donald Trump, and more. Each of these stories lays bare the new reality of twenty–first–century superpowers: the closer they get to one another, the more personal their frictions become.

“Cuts right to the heart of the relationship between Silicon Valley and China: the tangled history, the current tensions, and the uncertain future . . . a must–read.”—Kai–Fu Lee, former president of Google China and founder of Sinovation Ventures

Matt Sheehan served as a foreign correspondent in China and is currently a nonresident fellow at the Paulson Institute's think tank, MacroPolo. There he researches and writes on the Sino–U.S. technology relationship and ties between California and China. In 2018, he was short–listed for the Young China Watcher of the Year Award. Sheehan grew up in the San Francisco Bay Area and spent over five years living in mainland China. His writing has been published in Vice News, The WorldPost, Foreign Policy, and The Atlantic. He is based in Oakland, California.

“Sheehan cuts right to the heart of the relationship between Silicon Valley and China: the tangled history, the current tensions, and the uncertain future. The Transpacific Experiment is a must–read.” —Kai–Fu Lee, former president of Google China and founder of Sinovation Ventures


“Entertaining . . . As the trade war between China and the U.S. intensifies, the need for a deeper understanding of how the two countries interact has become more urgent than ever. The encounters between individuals from the world’s largest and second–largest economies are rich with storytelling potential and opportunities to draw cross–cultural insights.” —The Wall Street Journal

“Judging by his intelligent first book, Sheehan is a reporter we’ll look to in years ahead as we try to understand the nuances of the ever–shifting China–U.S. relationship.” —Kevin Canfield, San Francisco Chronicle

“A revealing, refreshing dive into one of the most telling nexuses of the U.S.–China relationship. Sheehan’s colorful odyssey from college campuses to Beijing start–up land is a well–drawn portrait of how the two countries are forging our economic future.” —Te–Ping Chen, reporter for The Wall Street Journal

“Nuanced, layered, and engaging, Matt Sheehan’s The Transpacific Experiment offers a fresh take on how China’s rise affects America, and how America affects China’s rise, through rich reporting in his home state of California, with a perspective gleaned from years of living and reporting in China.” —Mary Kay Magistad, former China correspondent for NPR and PRI’s The World, current host of the Whose Century Is It? podcast

“A timely reminder that the United States–China relationship has been instrumental in the growth of a prized cornerstone of the U.S. economy—California, and more specifically, Silicon Valley. Sheehan, a Paulson Institute fellow, lays out how the human and financial capital shared between China and California helped facilitate the development of two massive tech industries, along with some unexpected consequences.” —Michael Zelenko, OneZero

“Timely reading in an era of looming trade wars and the decline of American economic supremacy.” —Kirkus Reviews

“A timely and important book. Matt Sheehan observes and navigates with skill the shifting currents of the relationship between California and China, the most important economic underpinning at times both uniting and dividing the United States and China. From Silicon Valley to Hollywood, from college campuses to real estate brokers to struggling industrial zones, Sheehan chronicles with aplomb the Chinese talent and capital that has arrived over the past decade and the questions growing within both nations about their relationship with each other, with California, as ever, at the frontier.” —Duncan Clark, author of Alibaba: The House that Jack Ma Built

“Even amidst an escalating and so–far attritious trade war between China and the United States, there is one state that has acted as a laboratory for the relationship between the two countries—California. Matt Sheehan spent six years examining the 'fluid ecosystem of students, entrepreneurs, investors, immigrants, and ideas bouncing back and forth between the Golden State and the Middle Kingdom.'“ —Dylan Schleicher, Porchlight
Don't miss news & events from Counterpoint Press.
Subscribe to the newsletter today.